And welcome back to another interview on Fiction Friday. Today Anna Zabo is in the hot seat. As always, the interviewee will do the talking. Here we go.

As a young person, books opened up worlds for me. They made me laugh and cry. I saw love and the flowering of hope along with the perils of hate and vengeance. I learned that even the smallest of people could find the strength to change the world. Books lifted me up and gave me hope. I missed characters when I finished books and was overjoyed if I could meet them again in another. More than anything, I want to give to readers what those authors I read gave to me. I want to stir emotions and grip hearts. I want to show hope in darkness and how much power love can invoke.

-Upcoming publications or works in progress?

I have a contemporary fantasy short story, Missing Persons, forthcoming next year in the Trust and Treachery anthology. It’s under my other name.

I’m currently working on the sequel to Close Quarter and also on a fantasy based loosely on the hundred years war.

Here’s a wee little peek at the sequel to Close Quarter, which has the working title of Strong in Spirit:

---
The Order had sent him an adult to train. A human. A man. They knew he didn’t teach adults—human or otherwise—hadn’t since the debacle with Ozan. Yet here Vasil was, grasping Altan’s hand, hope peeking though the cracks in the fear and bitterness the man wore like a second skin.
---

My favorite genre is fantasy, because it can take you away from the “real world” while still teaching you quite a lot about that world. And the hope I glean from fantasy makes me believe that we can make this world a better place, too.

There’s a scene near the end of Close Quarter where Silas faces his past and is finally able to put many things to rest. It’s sad and hopeful and joyous all at the same time. I ended up writing through tears. And I’ve been told it’s made others cry. But it ended up being my favorite scene in the book.

The Next Big Thing

The Next Big Thing

Last week, I was tagged by my friend/classmate at Seton Hill, Jennifer Loring.

Here’s what I’ve got to say.

-What is the working title of your book?

By the Fight of the Silvery Moon

-Where did the idea come from for the book?

NCIS—the TV show, not the actual government organization. I love the show and one day wondered “What would this be like with magic?” Make a few changes, build a magic system and ta-da.

-What genre does your book fall under?

-Which actors would you choose to play your characters in a movie rendition?

-What is the one-sentence synopsis of your book?

When Vern Sumac, former dryad to a Poison Sumac and current office assistant at the New York branch of the Magical Investigation Agency (MIA), witnesses the murder of a supposedly human Times reporter while he is in wolf form, she needs to rethink everything she knows about magic and help her boss/best friend, Inspector Warren Gazeban, find out who did it and why.

-Will your book be self-published or represented by an agency?

Issues with the way this is worded aside, I’m prepping to query it to agents. We’ll see what happens. *fingers crossed*

-How long did it take you to write the first draft of your manuscript?

God, I’m not even sure. It’s gone through phases. Originally, it was a novella that took a year or so because I kept making changes. The version I have now took, probably, a couple of months. The last 50k was a pre-nanowrimo type of thing. (October instead of November)

-What other books would you compare this story to within your genre?

-Who or What inspired you to write this book?

Like I said, NCIS, but also the burning desire to write something purely fun. My writing was always so serious before I started on this project. I wanted a character that I could pour all of my sarcastic thoughts into and who could then think them on paper for the rest of the world.

-What else about your book might pique the reader’s interest?

I’ve read so many urban fantasy novels, I think I’ve lost count. Some have very refreshing takes on magic, others—not so much—and I’m thoroughly sick of any type of plotline that centers around vampires. So I deliberately picked a creature not given a lot of spotlight space (the dryad aka tree nymph) and then asked myself “what would the strangest thing that could happen to a dryad be?” Bingo, main character.

Posted by Unknown at 5:04 PM No comments: 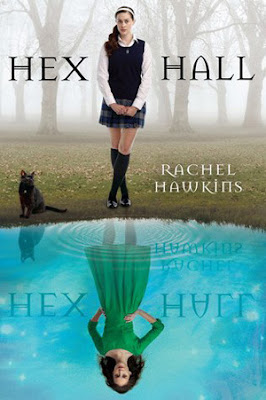 In the wake of a love spell gone horribly wrong, Sophie Mercer, a sixteen-year-old witch, is shipped off to Hecate Hall, a boarding school for witches, shapeshifters and faeries. The traumas of mortal high school are nothing compared to the goings on at "Freak High". It's bad enough that Sophie has to deal with a trio of mean girls led by the glamorous Elodie, but it’s even worse that the trio is an extremely powerful coven of dark witches. Complicating things further are Sophie’s growing feelings for Elodie's gorgeous warlock boyfriend and her friendship with the most despised student on campus. As if normal high school problems times ten aren’t enough, Sophie finds herself at the center of endless trouble when someone starts murdering students and Sophie’s despised friend is the top suspect. A secret society is out to destroy all supernatural creatures, especially Sophie. When Sophie begins to learn the disturbing truth about her father, she is forced to face demons both metaphorical and real, and come to terms with her own growing powers.

Hex Hall is a young adult book featuring a main character who uses power to an alarming degree and is then swept off to a secret boarding school where she will be around others of her kind and learn to control her magic. Like heroes of similar books, Sophie Mercer is super-powerful and has abilities she doesn’t know about. What makes this book different is that Sophie knows exactly what she is from the get go. This allows her to be effective and knowledgeable when students start to go missing.

Posted by Unknown at 7:59 PM No comments: