MCS #5: Aladdin and the King of Thieves 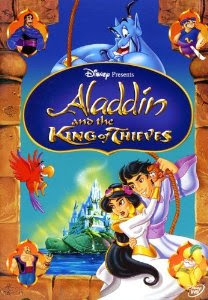 Aladdin and Jasmine are finally getting married. But before they can say “I do” the wedding is interrupted by the forty thieves. In the wake of the disaster, an oracle reveals that Aladdin’s long lost father, Cassim, is still alive. To find him, Aladdin must dive deep into the realm of the forty thieves, and the answers are nothing like he expected.

Holy tornado, Bat Man! (Don’t ask why tornado. It’s just the first word that popped into my head.) Usually I’m very perceptive about when Disney reuses actors, but I never caught onto this one. The villain in this movie (Sa’luk) is voiced by Jerry Orbach.

That voice sound familiar? It should. He was Lumiere in Beauty and the Beast.

On that note, after getting a bunch of replacement actors for Return of Jafar, the crew seems to be all back in place for the third adventure—including Robin Williams as Genie. Perhaps Jasmine worked her princess magic.

K, question. Did anyone else think Aladdin and Jasmine got married at the end of the first movie? Cuz I totally did. Sultan gave the go-ahead. Aladdin and Jasmine flew off into the moon (Aladdin in prince garb), and there were fireworks. It looked pretty wedding-ly to me. But apparently it wasn’t.

Tipping my hat to Disney for a great story about adventure, romance, and the meaning of family. Both Aladdin and his father show wonderful character and relationship growth. People take responsibility for their actions.

Also, this movie contains a reference to Terry Pratchet’s Diskworld series. I’m not sure if that was Disney’s intention, but it is there nonetheless. Yes, I am speaking of the island on the back of the giant turtle.

Keeping characters true to who they are.

At the end, Aladdin and Jasmine are finally (for reals this time, guys) wed. Aladdin’s father watches the ceremony from the sidelines, and after it’s over, he leaves. It’s not a “well I don’t care about my kid” leaving. It’s a “my kid is all set. I saw this big event in his life, and I’m not the kind of guy who stays in one place for very long.” In short, it’s true to Cassim’s character.

This is important for writing in general. If Cassim had stayed and settled down in the palace, it would have been nice for Aladdin, but it wouldn’t have been realistic. And I think the movie would have lost something. There’s something powerful about that final image of father and son accepting one another for who they are, and there is something equally powerful about giving characters their identity.

And join me next week for a non-Aladdin movie (awah?), Alice in Wonderland.

On the Importance of Leaving One's House

It’s a thesis deadline week, so this post is going to be short.

Actually, this Saturday is my last partial-thesis deadline. By this I mean that the deadline after this is when it’s due, as in the entire thesis is due to be graded pass or fail.

As a result, I’m a bit stressed out, but it’s nothing I can’t handle. Theoretically.

This brings me to today, though, and this post. Changing up writing scenery is important. My local writer buddies (collectively known as Write Club) have a write-in every two weeks at a local coffee/sandwich shop. Sometimes these turn into a talk-and-hang-out session. Lately, we’ve been good about avoiding this, however, and tonight we actually worked.

That was exceptionally helpful. I think I’ve finally figured out my thesis’s ending (fingers crossed), but I did not want to write the beginning of the last chapter. Prior to the write-in, that was the only part I hadn’t gotten down on computer screen (not paper).

The write-in helped immensely. The change of location sparked the desire to work. My room gets monotonous after a while. More importantly, it allowed me to go into “don’t think, just write” mode. I now have the first half of my last chapter. It needs severe edits, but I can work with that. As a wise writer I know (whose name escapes me) once said, you can’t fix a blank page.

Where do you go when you need a change of scenery?