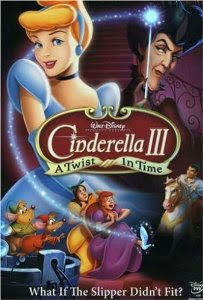 Cinderella’s stepmother gets her hand on the Fairy Godmother’s magic wand and turns back time to undo Cinderella’s happily ever after. Can Cinderella win back the prince?

K, the obvious problems of having a III without having an I aside, why couldn’t this be the first movie? This idea is made even more complicated when you take into consideration that it turns back the events of I, but really, this movie had so much going for it. Cinderella does things. She doesn’t sit around and wait for the mice and the Fairy Godmother to make her dresses. She goes to the palace and works to get the prince back. She stands up for herself. She fights. In a nut shell, she’s way more independent than she was in movie I.

So again, I ask, why couldn’t this be the first movie?

This one even had some good songs, like this one.

Can we talk about the character growth in this song? Anastasia is a person. She changes. She’s not just the “evil for the sake of evilness” stepsister, and that’s awesome. This is the closest Disney comes (outside of Frozen) to having two equally important female characters who aren’t at odds with one another.

This movie is not without its moments. There are some wonderfully hilarious logic problems, such as when Cinderella (walking) gets to the palace twenty minutes before the carriage.

Can we have more female characters like Cinderella in this movie? She wants love, yes, but she’s strong and confident about it. She doesn’t need to wear black leather. She doesn’t need to sleep around to feel like she’s being taken seriously. She’s a woman who knows what she wants, and she fights for it.

And join me next week for Donald in Mathmagicland.

Making Out Does Not make Characters Unable to be Killed, Just Sayin

I missed last Wednesday. A lot’s been going on. Good news, though. My thesis passed!!!!

Well, the happy parts of this scene, but I love the whole thing. So yeah.

And now to the meat and potatoes of today’s post. I’ve seen versions of the following scene too many times.

*Hero and heroine are running away from something stronger than them that’s trying to kill them. They stop.*
Hero: “You know, I love you semi-randomly.”
Heroine: “You know, I semi-randomly love you, too. Wanna make out?”
Hero: “Yes.”
*They make out*

Umm, hello? Your being chased by something that’s very strong and wants you dead. WHAT ARE YOU DOING!?!?

“But having them declare love/kiss while they’re in danger is so romantic.”
It’s also bad for their lifespans and a timing problem. If whatever’s chasing them is stronger, odds are good it’s faster, too. So now hero and heroine are not only being chased, but their pursuer is gaining on them. Now, think, in real life you wouldn’t stop and start making out (or maybe you would if you figured you were dead anyway), but this is fiction. The good guys win. So if they stop to make out, you have to delay the superfast thing chasing them, which, as I said, creates timing problems. I don’t want to be left wondering what happened to the thing that was right behind them.

Also, it’s a beautiful moment when they’ve escaped and can be excited they both survived.

This works because, well, they aren’t in danger yet. It’s also a great way to break up the romantic moment. (What, I’m the only one who enjoys torturing their characters by having the big romantic moment interrupted by a three-headed dragon? Fine then.)

This is particularly doable if either the hero or heroine has strong enough magic/access to sufficient technology to make this happen. It’s also a cool moment where you get to show off your character’s talents.

It also gives a moment for making out where I’m not wondering why they haven’t been eaten/burned to a crisp/carried off to be forcibly married to the president of the underwater basket weaving club.

-Make it a quick kiss/confession

*Stopped to catch breath (preferably somewhere where the thing chasing them has to break down a wall before getting to them)*
Hero: “So in case we die, I love you.”
Heroine: “Same here”
*quick kiss/almost kiss right as wall crashes down and then back to running*

Hero: *running and possibly ducking flying objects* “So in case we die, I love you.”
Heroine: “Same here.”
*air kiss*

So, authors, I am begging you. Please, no more “we’re in immediate mortal danger…let’s make out” scenes.