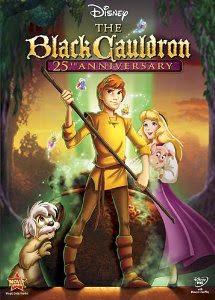 The Black Cauldron is based on the first two books in Lloyd Alexander’s Chronicles of Prydain series—The Book of Three and The Black Cauldron. The movie, as you can see, was very originally named.

Before I get into what it’s about, this movie is Lord of the Rings meets Star wars, which is hilarious because it came out before the LOTR movie adaptations. Think I’m nuts. Below is the beginning of the Wikipedia plot summary. The stuff in brackets is what I’ve added.

Taran [Luke] is "assistant pig-keeper" [assistant farmer] on the small farm [planet] of Caer Dallben [Tatoowine], home of Dallben [Gandalf] the Enchanter. Taran [Luke] dreams of becoming a great warrior [fighter pilot/jedi], but must stop daydreaming because his charge, the oracular pig [droid] Hen Wen [R2D2], is in danger. The Horned King [Sauron], a fearsome, skeletal, undead king [floating eyeball] who wears antler horns on his head, hopes she will help him find the Black Cauldron [one ring], which has the power to restore a kind of life to the dead [his full power/existence], as Undead slaves called "the Cauldron-Born" [[nasgul/ringwraiths], which he will use to rule the world. Dallben [Gandalf] directs Taran [Luke] to take Hen Wen [R2] to safety, but the lad's daydreaming results in the pig's capture by the Horned King's forces [the empire/Sauron’s guys].

Taran [Luke] follows them to the Horned King's stronghold [Mordor] and acquires the small, pestering companion Gurgi [Golem] along the way. Taran [Luke] leaves Gurgi [Golem] to sneak into the castle and rescues Hen Wen [R2], who flees, but he is captured himself and thrown into the dungeon, soon to be released by Princess Eilonwy [Leah], a girl his age who is also trying to escape. In the catacombs beneath the castle, Taran [Luke] and Eilonwy [Leah] discover the ancient burial chamber of a king, where he arms himself with the king's sword [lightsaber]. It contains magic that allows him effectively to fight the Horned King's [Sauron’s] minions and so to fulfill his dream of heroism. Along with a third captive, the comical, middle-aged bard Fflewddur Fflam [Pip/Merry], they escape the castle and are soon reunited with Gurgi [Golem].

Don’t believe me? Check this out.

All we need is a “my precious.”

Okay, super cool moment here. Eilonwy is voiced by Susan Sheraton. Who, you ask? The voice of Trillion in the original Hitchhiker’s Guide to the Galaxy radio show.

Anyway, I recommend this movie at least once. It’s rather cute with a fun ending. I also recommend the books. They are something of a classic.

After some thought, I’ve got nothing from the movie specifically. So I’ll reiterate what I said about reading the book because it’s somewhat of a classic and expand on that to say read all the classics in your genre. As The Sound of Music says “Start at the very beginning. It’s a very good place to start.”

And join me next week for Cinderella.

What happens when plotting and pantsing fail?

One of my novel-length projects refuses to cooperate no matter what I do (or don’t do). It hates my plot ideas. So I tell it to come up with its own idea. Then it sits there and doesn’t talk to me.

I feel like the answer is “walk away for a few days.” Problem is, I just walked away for a week, and I’ve still got nothing. What’s the next step? Is it time to get the pitchfork out and make threatening gestures?