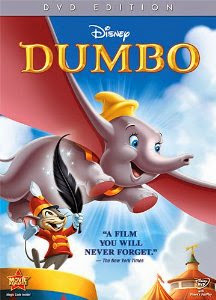 IMDB Blurb
Ridiculed because of his enormous ears, a young circus elephant is assisted by a mouse to achieve his full potential.

K, I’m getting to this post the night before. It’s been a long week. So this will consist of some highly informative bullet points.

-Don’t let your mean, if jealous, girlfriends name your kid.

-Don’t pull a baby elephant’s ears, especially if the mother is present.

-Don’t make a flying elephant dependent on a feather.

-Do be proud of your children when they do something awesome.

Thank you for your patience with this abbreviated post.

Join me next week for The Emperor’s New Groove

I know, so cheery, right?

Cheery or not, it’s a topic a lot of fiction writers have to deal with. Characters die, and like with the characters who live (most often the protagonist and at least a few of his peeps), their deaths need to mean something/get the reader to respond emotionally.

In terms of recent literature, Rue’s death in The Hunger Games is hailed as one of the most moving. Here’s a twelve-year-old girl, dying. Here’s Katniss, sitting over Rue’s body singing and, unknowingly, inspiring a revolution. There’s a conversation—all the things they didn’t say wrapped up. The goodbye is drawn out and tear-jerk worthy.

These types of death scenes are common. Today, though, I present the other side of the coin—the sudden death.

They say fiction is like life. Sometimes in life we get the chance to say goodbye. And sometimes we don’t. Sometimes, we just find/are told we’ve lost a loved one. There are no last words. There’s no “one last time.” There is just a sudden whole where there was once a person.

And I argue that this kind of death can be just as moving in fiction. There is no grand “I have to tell you/always remember/just know” speech, but there is a well of emotions. There is the protagonist’s inner struggle. “If I’d moved faster/if I hadn’t asked them to come/if I’d just….” There is blame, which is always something that produces tension. Even more, there is the wonder. What would that character have said if they’d gotten the chance? We’ll never know because they’re just gone, much like Sirius Black.

Note: This kind of death scene is made even worse when the protagonist doesn’t have time to mourn, when a character is killed in battle, for example.

K, I’m done being depressing now. Keep this alternative death in mind while writing, and go do something cheery.