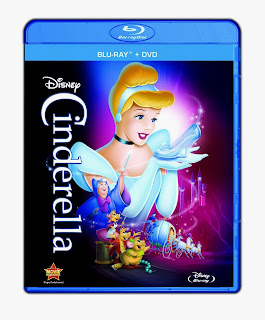 IMDB blurb
When Cinderella's cruel stepmother prevents her from attending the Royal Ball, she gets some unexpected help from the lovable mice Gus and Jaq, and from her Fairy Godmother.

Oh man, where to start? Walt Disney said "She believed in dreams, all right, but she also believed in doing something about them. When Prince Charming didn’t come along, she went over to the palace and got him.”

Where in here is Cinderella doing something?

Needless to say, this wasn’t my favorite Disney movie. I actually can’t remember when last I watched it or if I even watched the entire thing.

And then there’s the sweet irony that I was cast as Cinderella’s mother when I was in Into the Woods in college.

K, now, Cinderella isn’t all bad. It had some fun songs, namely the mouse’s song. Please don’t get me started on how annoying Bibbidi Bobbidi Boo is? I won’t torture you with it.

Actually, yes, yes I will.

That’s what friends are for, right?

I’m a big fan of Cinderella retellings, especially ones where she does stuff. So to make up for that musical business earlier, I’ll supply you with some awesome Cinderella reading material.

Humans and androids crowd the raucous streets of New Beijing. A deadly plague ravages the population. From space, a ruthless lunar people watch, waiting to make their move. No one knows that Earth’s fate hinges on one girl.

Cinder, a gifted mechanic, is a cyborg. She’s a second-class citizen with a mysterious past, reviled by her stepmother and blamed for her stepsister’s illness. But when her life becomes intertwined with the handsome Prince Kai’s, she suddenly finds herself at the center of an intergalactic struggle, and a forbidden attraction. Caught between duty and freedom, loyalty and betrayal, she must uncover secrets about her past in order to protect her world’s future.

I actually love this entire series. They are sci-fi retellings of Cinderella, Little Red, Rapunzel, and Snow White. The last book comes out at the beginning of next year, and I’m very impatiently waiting.

“The Wrong Foot”
by Stephanie Burgis

This was published in Daily Science Fiction a while back. I loved it and then promptly read Burgis’s novel-length work. So let this be a stepping stone for you to get your glass slipper-clad foot to some great books.

And join me next week for Cinderella II.

As I write this post, I grumble about as/ing constructions.

There are other blog posts on this topic. I’m sure of it. I just feel the need to address it because as/ing constructions bug the sh*t out of me.

What’s bad about them? Nothing, if used sparingly. When overused, they present the same problem as any other craft element. Repetition is annoying.

The reason I hate them has nothing to do with their actual existence. I’ve seen them used well. It’s just that 99 times out of 100, they don’t do anything. Consider the following.

Holding my breath, I contemplated the situation.

This feels like a sword strike on my ears. Not only is nothing happening, it’s drawing attention to thought processes. In a nut shell, this sentence is stagnant. Just cut it.

The following is a bit better.

Standing tall, she entered the room.

She straightened her spine and strode into the room.

Now we have a lot of active, well, action. Our person is doing stuff, and we’re seeing her actually straighten—stand tall. Then we replaced the not-so-showing “walk” with the much more informative strode.

As she walked into the room, she took in the painting on the wall.

Personally, I think as constructions are worse. Absolutely nothing interesting happens in this sentence.

She entered the room. A painting of a ship at sea dominated the left-hand wall.

Look at all that information!

Case and point, 99 times out of 100, there is a stronger way to phrase as/ing constructions.