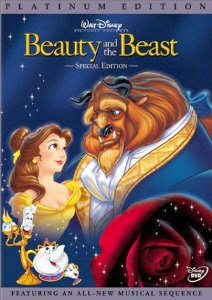 IMDB BLURB
Belle, whose father is imprisoned by the Beast, offers herself instead and discovers her captor to be an enchanted prince.

Seriously, what’s not to love about this movie? The heroine is an independent, willful woman who is willing to fight for those she loves. There’s a purely evil villain, and there’s a group of epic side characters. I’m sold.

I’d totally be friends with her.

Moving on to the music. It’s lovely, fun, and, in places, even haunting. I’m thinking about the West Wing sequence in particular there. They added “Human Again” in the special edition DVD, and it didn’t ruin the movie.

Then there’s the scene where the beast dies. It’s beyond sad, and did you know that the music in the movie isn’t the original music for that scene? Check out the original score.

While I think this is absolutely lovely, I think the music in the movie works better for the scene. Here’s that version, along with the score through the rest of the movie. Don’t look at me like that. You know you want to listen to this.

Gastone—yeah, self-centered and a total jerk much? I mean really. There’s an entire song dedicated to how much he loves himself. That’s just sick.

And then there’s this picture that I just have to share…cuz reasons. *Warning: cursing.*

That’s my picture on Twitter, and I have no shame.

Also, it gave Jerry Orbach more singing time, which I am always in favor of.

And join me next week for Beauty and the Beast: The Enchanted Christmas.

A spoon full of research helps the medicine go down

Last week I appealed to reviewers, telling them to stop calling authors stupid.

Which they seriously need to do because it’s not right.

Anyway, I left off that post with a promise to authors. This week, my plan is to unravel what prompts reviewers to take inappropriate jabs at authors.

It seems to boil down to one thing—research.

As I pointed out last week, diverting from what is considered fact on Earth, in fiction, is fine, especially in the case of science fiction, fantasy, horror, and anything paranormal. However, there is a difference between changing up how the world works for the story and just plain ignoring facts. I will put this as succinctly as possible.

Authors, if you are working with characters that you have established as human (without any strange diseases/disorders or type of fantastic or technological additions to their being, i.e. normal humans) in a world that is Earth or that follows the basic physical/physiological rules of Earth, you must be accurate.

Let’s take an example—hair. It’s a simple, everyday thing. Without even getting into the science, it is clear that hair grows at a certain speed. Some people have faster growing hair than others, but it is a widely accepted fact that the average human being’s hair takes a while to grow a noticeable length.

Now, let’s say Author A (I know, real creative of me) introduces an ordinary human character who lives in a world that follows the physical/physiological rules of Earth. That character’s hair is only going to grow so fast. So if the author has a character appear with shoulder-length hair and then, three days later, shows us that same character with waist-length hair—with no extensions or other hair-growing aid—that’s wrong.

And too often, they are not nice about it. That is their fault. I covered that last week, but authors, do you see where the propensity for reviewers to say “this author is stupid” comes from? If I read a book where this happened, I’d be forced to think one of the following:

-The author doesn’t know what he/she is talking about.
-The author did not do his/her research. I wonder what else won’t be researched?
-The author didn’t edit his/her work.
-This author had a terrible editor. (which is just placing the lack-of-paying-attention blame on a different person)
-The author is an alien. (K, not likely, but who knows, right?)

Honestly, I want the solution to be an editing mistake. I want to believe, every time, that someone, at some point, just didn’t see the mistake. Unfortunately, though, I have read books where the mistake is glaring and goes on for paragraphs, and I just cannot believe that neither the author, nor any of the beta readers, nor any of the editors noticed it. So I’m forced to think the author didn’t know something so basic or, even worse, didn’t care, thus showing a complete lack of interest in his/her own work. More often than not, this leads to me putting the book down, or if I do finish, it leads to me never picking up another book from that author.

It never, however, leads to me writing a scathing review about how stupid the author is and then posting said review on the internet.

Message to take away: authors, research and edit.

I did a guest post for horror writer C.R. Langille (a fellow SHUer of mine). Have a look at what I think about the fantasy genre.