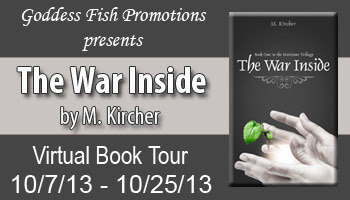 THE WAR INSIDE by M. KircherYa dystopian paranormal. Book 1 in the Horizons Trilogy 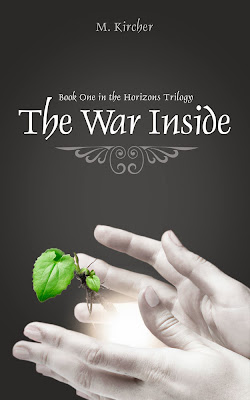 AN INTERVIEW WITH M. KIRCHER
Q. What book and/or experience made you want to be a writer?

It sounds so cliché, but The Lord of the Rings trilogy changed my life. Those books, plus everything written by Anne McCaffrey, made me want to write stories in a major way. I have been a bookworm all my life; my parents used to bribe me to have play-dates! But I’d always say, “No thanks, I’m going to go up to my room to read.” Then, when I was about thirteen, my grandmother presented me with books by Tolkien and McCaffrey as birthday presents and that was it, I was hooked on science fiction and fantasy. I love diving into new worlds and fantastic scenarios, and I really feel that sci-fi empowers readers. The genre pushes the envelope and makes the reader imagine what it would be like to have to special powers, to do that amazing thing, to finish that impossible quest. I’d like to hope that the emotion these stories inspire will carry over into real life. That we can all tap into the courage of our favorite hero or heroine, and do something awesome with our own gifts and talents. And I mean, who didn’t sit in a movie theater watching Frodo destroy the One Ring and get tingles? I want to write stories that inspire action and create tingles.

Q. What genre(s) do you write?

In fiction I write YA Science Fiction, Fantasy, and Romance. (Sub-genres of Paranormal, Dystopian, Metaphysical, and Visionary)

My non-fiction work deals with Relationships, Dating, and Marriage. (Under Melissa Kircher)

Q. The War Inside: Book One in the Horizons Trilogy

The end of the world is only just the beginning. So eighteen-year-old Thea discovers when her solitary life on a dying Earth is shattered by a mysterious dream, a devastating choice, and a strange gift that propels her on a journey towards the restoration of all mankind.

Thea is bitter and alone; eking out her miserable life on the sunless, cloud-covered Earth she inhabits. A terrifying dream convinces her to save the life of an injured girl, and despite her misgivings, Thea decides to rescue sixteen-year-old Viviana. She soon learns that gentle Viv has a life-threatening infection, as well as a freakish patch of glowing skin over her heart. When this light spreads to Thea, causing her palms to glow, she is forced to trust Caden, an arrogant, lazy, and annoyingly handsome boy she despises. Caden has a map to the last city on Earth, and the only place that might have a cure for both Viv's infection and the strange light on Thea's hands. As the trio embark on a journey through the barren wilderness, Thea and Caden discover, and try to fight, their mounting attraction to each other. Along the way they are joined by Rain, Naomi, and Enoch who explain that the light is not a curse, but a powerful gift meant to heal the polluted Earth and reconnect the remnants of humanity. When the group learns that Viv is the key to this planet-wide redemption, and that there are deadly shadows who will do anything to keep humans in the darkness forever, they each must make the difficult decision to help Viv fulfill her destiny...and save the world.

Thea felt as if she’d been punched in the stomach. “I’m nothing like you,” she growled in a low, threatening tone.

Caden stood up and held out his glowing palms. “If you had seen these for the first time, right after being attacked by a terrifying creature that obviously intended to kill you, wouldn’t you have left, too?” he asked. “None of this feels real, Thea. But somehow it is.” He reached down to one of the clay pots by his feet and grabbed a handful of dry, gray earth. The light from his palm spread into the dirt, and it became moist, brown soil. He let it crumble and fall through his fingers back into the pot.

“It’s real. All of it. And Viv. She changed me, even before I left, I think. I started to feel things, and it scared me. Is that what you want me to say, Thea? I was scared; I admit it.”

Thea hunched her shoulders, knowing Caden was right. If she had been in his place, she would have walked away. Without a second thought.

Q. For aspiring writers, any tips?

Cultivate skin like a rhino and a teachable spirit. There will always be people that don’t like your work. That’s okay. Writing is art and it is subject to the opinions of others. Don’t let criticism get you down. Keep writing, keep working, and keep putting yourself out there.

But, you must also look for ways to get better. A teachable spirit means that you listen to critics and see if they might have helpful insights. Work with editors, instead of against them. Every editor I’ve had has made me a better writer. Always be open to opportunities that will help you learn and grow. And above all…enjoy your work!

Science Fiction & Fantasy hands down. Give me a well-written book and a new world to get lost in and I’ll stay up waaaaaay too late. I’ll even skulk around in the book sales that libraries have looking for older sci-fi and fantasy gems. You can get some pretty good deals for a dollar. I’ve also been known to get lost in a romance, or two, or three. But they have to have a happy ending because I’m not a fan of tearjerkers. I still have not read or seen The Notebook, I just know it will break my heart.

Honestly, The War Inside is my favorite so far. But I think that will change when I get to the third book in the trilogy. In the third installment, Viviana really grows up and comes into herself. I can’t wait to write it and see her master the true potential of her power. I’m so excited to be writing books now, as well as blogs and magazine articles, and I just can’t get enough of thinking up new plots and characters. I feel like it’s almost easier to write books. You have so much more room to flesh things out and see where the story takes you.

Thank you so much for having me!
-M. Kircher 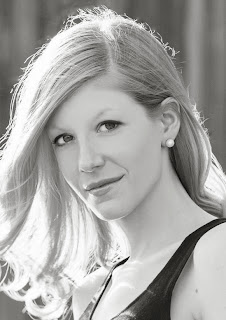 M. KIRCHER graduated with a B.A. in Fine Arts from Gordon College and is currently a writer, blogger, and artist. The War Inside is her first novel, but there are more to come including the second book in The Horizons Trilogy, The Gray Horizon and Dreamcatchers, a modern, feminine twist on the legend of Rip Van Winkle. Since its release, The War Inside has hit Amazon.com’s Kindle Top 100 Bestsellers in “Dystopian” & “Metaphysical & Visionary Fantasy.”

M. Kircher devours YA, science fiction, fantasy, and romance on a regular basis and is immensely happy to pour her time and energy into creating stories for other people to enjoy. Bob Ross and J.R.R. Tolkien tie for her two favorite people of all time. Kircher and her husband write regularly for Relevant Magazine and Simply Youth Ministry. They also just had their first marriage book published called 99 Thoughts on Marriage and Ministry (Group Publishing, 2013) M. Kircher lives in Connecticut with her husband, one energetic son, and a new baby girl.

Also, buy THE WAR INSIDE on Amazon.

You’re welcome, M. Thank you for the awesome interview!

The author will be awarding a $25.00 Amazon.com gift card to a randomly drawn commenter during the tour.

I raged the other day. The poor comma. It’s one of the most misused punctuation marks out there, probably because there’s so many ways to use, and therefore abuse, it. It’s understandable in some cases. Proper comma usage is confusing. I know I mess it up. There are two uses, however, that are so basic. And yet I see them done wrong all the time. These are direct address and compound sentences.

When someone is addressed, separate their name/title/pronoun substitute with a comma. I’ll use a famous little joke to prove my point.

Not only does the comma save grandpa’s life here, it changes the meaning of the sentence. In the first, the speaker is suggesting grandpa would make a nice meal. In the second, the speaker is telling/inviting grandpa to partake in a meal that is, in fact, not comprised of grandpa (or at least not that particular grandpa). I can’t even begin to say how many times I see the comma of direct address left off. Writers, I beg you, it’s a small, simple thing. Do it.

“I wanted to go to the party but mom said I couldn’t.”

“I wanted to go to the party, but mom said I couldn’t.”

There are lies spreading that when “and” connects two sentences, the comma is not needed. This is, as I just said, a lie. You need the comma before a conjunction in a compound sentence with “and,” “or,” “but,” “nor,” “so,” “for,” and “yet.” I repeat. You need the comma.

As a matter of style, it is sometimes said the comma can be dropped before conjunctions separating very short sentences. While this may be the case. Don’t do it. You will be taken less seriously as a writer.

As an addendum to this point, don’t add commas when the conjunction does not separate complete thoughts.

“She swept the floor, and made the bed.”

“She swept the floor and made the bed.”

And I wonder what it says about MS Word’s “grammar check” that it didn’t pick up these errors. *faceplant*

Anyway, go forth and use commas in these situations correctly.

Thanks for your comma patience.

Posted by Unknown at 5:27 PM No comments: