The Purpose of a Movie Critic

This isn’t a new trend. I wasn’t feeling great the last few days, and writing blog posts wasn’t happening. I came across something this morning that drove me to action, however.

In preparation to see the movie adaptation of City of Bones (based on the book by Cassandra Clare of the same name) I spent some time this morning looking up movie times for the week after next. I wound up at fandango.com, which posts critics’ reviews on their movie pages. It appears City of Bones is not popular with the critics. Out of a possible 100, the highest ranking I saw was 63, and that was once. The rest were 50 and lower. I read a couple. I will withhold comment on their accuracy until I see the movie. My curious mind, though, then read some of the comments. I learned two things. First, many people who use the internet do not know or care about proper grammar, spelling, or etiquette. Second, many people who comment on critics’ reviews of a movie do not know or care what the purpose of a movie critic is.

Allow me to enlighten you. A movie critic’s job is not to compare the book to the movie…or the movie to the book. Their job is not to take the “poetic” writing of the author and apply it to the movie (where the author’s “poetic” words are not present). They do not try and match their review to a 4.14 star review on Goodreads (rating as of 10:27 AM EST on August 24, 2013). They do not say what people want to hear because it is what people want to hear. They do not—and teens, this one is for you—change their opinion based on your angsty comments about how “awesome,” “amazing,” or “hot” the characters are.

I’m so glad you asked. They review a movie based on, well, the movie itself. They evaluate the film as a product independent of the book. While the book might have been “amazing” or “awesome,” the movie might not be. I’ve read all of the currently released Mortal Instruments books and even the Infernal Devices books. My opinions do not matter here, but here’s a question. Readers, do you base the sequels on the first book? Do you base Infernal Devices on Mortal Instruments? Before you ask, yes, I saw all the similarities. I noticed how Clare intertwined the storylines together. But they are still separate series and separate books. You don’t judge each on the others, and you shouldn’t. Similarly, movie critics don’t and shouldn’t base their review of the movie off the book.

Another point—fans of TMI (The Mortal Instruments has the same initials as too much information—hmm) while you may be fangirling/drooling over Jace/Clary (depending on preference) and their story, keep in mind that a good number of people who see the movies will not have (gasp) read the books. So if a critic writes a review that says “compared to the book, this was good/bad/indifferent/whatever,” all those people who didn’t read the book will be left scratching their heads.

Now, do I always agree with a critic’s review of a movie? No. One of the comments I read this morning asked what was more important: the average viewer’s review or the review of a critic who goes into every movie with…not the best attitude. Truthfully, I think both are important. People will read both and form opinions. Here’s to options.

I leave you with this—people who disagree with a critic’s review, leaving a nasty comment with a lot of exclamation points about how the critic is absolutely wrong and can’t possibly understand the audience’s (your) deep connection to the book (and therefore movie) is not good form. On a similar note, critics—it is not good form to write condescending reviews or comments toward a certain audience. Young adult fantasy/dystopias/romances are big right now. There are some I like and some I don’t like. I’m twenty-four, studying writing, and aspiring to have novels published. I read some ya because I want to and some because it is assigned from school. My goodreads ratings of ya lit range from 1 to 5 stars. Does it make me an immature, childish adult because I read young adult for learning purposes? Does it make me a vapid, uneducated person because I happen to enjoy the better written/thought-out books?

Thanks, as always, for your time.

Have a good weekend.

Cover Reveal--CALL OF THE PISS FAIRY

There’s more than one way to skin a cat. 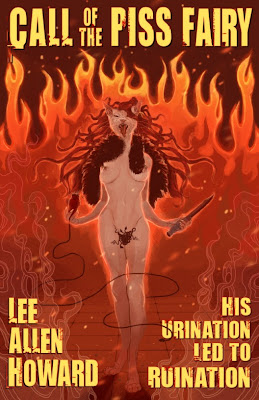 Russell Pisarek is 26 years old and still wets the bed. He grew up different from other young men because his vicious mother punished him for wetting by shaving his head, advertising his problem to all his high school classmates. He took out his frustration by skinning neighborhood cats.

Now fixated on dominating and humiliating women, Russell fantasizes about finding just the right girl—so he can shave her bald. He struggles to overcome his dark tendencies, but when his sister discovers he’s wetting again, she kicks him out of her house.

During this time of stress, the mythical Piss Fairy appears in his dreams, and Russell is driven to satisfy his twisted desires with his innocent coworker Uma, who also needs a new roommate.

When his plans go awry, the Piss Fairy commissions him for a much darker task that graduates him from shaving to something much, much worse.

Lee Allen Howard's bizarro psychological thriller, CALL OF THE PISS FAIRY, will be released first as a signed, limited-edition hardback this fall. The Kindle and Nook edition will follow soon after. Read the first scene here.

To be notified about availability, subscribe to Lee Allen Howard's private email newsletter.