Beginnings and Believability in Dystopias

I read an interesting article a few days ago that talked about why some dystopias don’t “make it.” One point was that we (the reader) are thrust into this post-apocalyptic world where every freedom known by Americans has been suddenly and completely “forgotten.” The rich live the good life, and the pour live in the equivalent of work camps. And there is no explanation as to how the world got this way. The reader is expected to just accept it.

Over the long weekend, I picked up a couple of dystopias. For each, I read 3 or 5 chapters before putting them down and half-heartedly telling myself I’d go back to them. No such thing will probably happen.

Why? Partly because of what the previously mentioned article said—the believability was flawed. More, though, because of how the stories began.

A paradox—if you will. In studying the craft of writing, I’m told to “begin in the action.” In the same breath, I’m told to “show the character’s normal world before launching into the earth-shattering events.” There’s a problem here. Many characters’ “normal worlds” are not filled with tension and conflict. Yes, conflict comes in all types (see this post for specifics on the argument), but starting with an unrelated conflict for the sake of beginning with a bang just seems…unnecessary. As a reader, I personally want my first chapter to establish the world. It doesn’t bother me if we’re not jumping off of buildings or fighting fire-breathing dragons in chapter 1. I want to get to know my character and my world, especially if it’s a fantasy or sf story.

The two books I put down over the weekend jumped into conflict. The first started with the main character in the back of a truck with a bunch of other girls. Very quickly, the girls were out of the truck and either being killed or sold. The main character was sold (because having her killed would have made for a really short story) and taken to a house where the story unraveled all-too-quickly. I felt like I was drowning in the speed of events.

What really made it a tough sell, though, was the massive amount of flashback-type scenes. There is a time and a place for flashbacks. They are usually used sparingly and show events long before the story in order to help see critical points in the character’s life. These flashbacks showed events that happened, as far as I could tell, almost right before chapter 1 started. Why didn’t the author just write the flashbacks as chapter 1 (thereby showing her main character living in poor conditions and being kidnapped)? Instead, I was tossed into a situation with no idea how I’d gotten there and forced to watch, what would have been awesome scenes, flit by as afterthoughts.

It’s a shame because the concept behind the book was good. But the choices and pacing just lost me.

The second book—I don’t know what to say. It began with a conflict that ended very quickly—too quickly. The chapters were twice the length of a normal chapter. While there isn’t a set-in-stone page count for chapters, 3000-4000 words is a good range to aim for. Too much more and the book just drags.

There was no real explanation of how the world got to its current state. The reasoning behind the battles to the death, though, was established. It was a bit overdone—“we are weeding out the weak in order to build a powerful army”—but at least it was there. My problems really started in chapter 2. Characters, organizations, and plot twists started flying and didn’t stop. By the time I gave up the character had joined a secret society, been told she needed to kill her “clone,” watched her family die, told her brother’s best friend/her best friend/I’m not even sure to get lost, and murdered a teenage girl without any feelings of regret. That was a lot to swallow in such a short time, and I just couldn’t do it.

Things to take away from this:

-When they say “start with action,” they don’t mean “skip any form of introduction and launch straight into the earth-shattering moment.” If we don’t see “normal life,” we can’t judge how life has changed.

-Balance the beginning chapters. Introducing too little causes stagnation and loses readers. Introducing too much causes confusion and loses readers. It’s said of the entire manuscript “if it’s not necessary to the story, odds are good it doesn’t need to be in there.” That applies to the opening chapters as much as the rest of the book. And just because it doesn’t belong in the opening chapters doesn’t mean it doesn’t belong in the story. Chapter 2 just might not be the right place to casually let it slip that your main character is an alien and part fairy…and an assassin…and has DID (dissociative identity disorder)…and has a drug problem…and—you get the idea.

Posted by Unknown at 9:25 PM No comments: 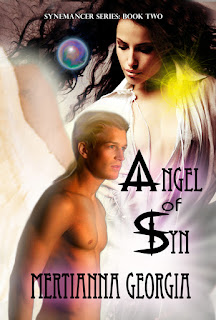 AN INTERVIEW WITH MERTIANNA
-What book and/or experience made you want to be a writer?

So many! The more recent fantasy writers like Laurell Hamilton, Anne Rice, Jim Butcher, Charlaine Harris, Kim Harrison, and others. But also the writers I grew up reading…Orson Scott Card, Frank Herbert, Ray Bradbury, Arthur C Clarke, Ursula Le Guin, Tanith Lee, Anne McCaffrey, Robert Heinlein, and the list goes on. They have all inspired me to one degree or another.

Because my father was in the military, our family moved every couple of years. The base libraries became my favorite place to be and reading my favorite thing to do. I especially liked reading about animals, SciFi and Fantasy. Those books helped me expand my horizons and develop a life-long desire to create worlds of my own through writing. I still get excited when I see one of those books, knowing the emotions they can still elicit in me – from wide-eyed wonder to pull-the-covers-over-your-head shivers.

I write Urban/Paranormal Fantasy, Mystery, and Literary Fiction. I may wander into other genres, but not at the moment.

ANGEL OF SYN. Book Two in the Synemancer Series.

Contemporary witch Cara Augustine goes international and inter-dimensional, from San Francisco to France to an alternate Eden-like dimension, in this second book of the Synemancer series.

Cara is a fugitive, pursued by the Portalkind police for breaking a major covenant. When she accidently made a werewolf her witch’s familiar, it amounted to enslaving a human. And the punishment is death. On the run for her life, she and her companions stumble into a strange paradise dimension. But they quickly find the dangerous world is filled with strange creatures, deadly and beautiful. And, because she’s quickly learning a Synemancer’s life is never simple. Cara has to deal with an amorous Nephilim (half-angel half-witch), a dangerously deranged French werewolf, and the darkly handsome Nightkind she just might love. Each powerful supernatural man has his own reasons for wanting to possess Cara, body and soul. But if the Portalkind police catch her, she’ll be in a fight for her life.

“Bart straightened from his defensive semi-crouch, still eyeing the Hounds warily. I glanced around the room to see if the orbs were here, but they were nowhere in sight. The mirror chimed and shimmered for the umpteenth time since I’d come into the room. A tall, pale man dressed in black and wearing a black backpack walked into the room. Azrael stood silently on Amelia’s hardwood floor, and by the expression on his beautiful face, he was angry enough to chew spells and spit out hexes. He quickly scanned the room. His ice-blue eyes focused on me and I had his full attention. All Hades was about to break loose. With two weres, two Hellhounds, and a Nightkind in the room, the situation was about to get bloody.”

Keep writing, finish your stories, never give up, and learn as much about the craft of writing as you can. Watch a little less t.v. or spend a little less time on the internet and use that time to write. Now if I can just take my own advice, I’d get a lot more done.

It’s been changing, but I love to read urban fantasy and YA paranormal. I also like mysteries if they have a good dose of humor thrown into the mix or a few ghosts or maybe a grim reaper.

My favorite story is called The Cat Maiden, a paranormal twist on an Aesop’s fable. It’s my favorite because not only was it the first short story I had published, but my son liked it too. That was important to me. 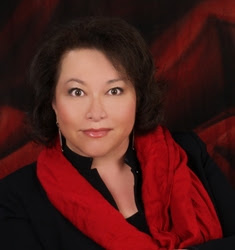 Mertianna currently lives with her husband, son, and three dogs in Northern California. At a young age, while traveling the globe with her military family, she discovered the joys of reading. Armed with a fascination for science fiction, the paranormal, and fantasy, she amused, shocked, and impressed her teachers with her imaginative stories.

“I currently live with my husband and dogs in northern California. I have a son who attends college in San Francisco. After years of working in the business world while secretly wishing I could be a writer, I finally took a leap of faith, stopped working (in business) and started writing. My first book, SYN IN THE CITY, was published in 2010 and I haven’t looked back since.”

As an adult, reality reared its boring head, and she joined the business workforce. After many years working as a professional manager while secretly wishing she was a writer, she took a detour from the corporate world to immerse herself in the fictional worlds of her own making.

Mertianna has accumulated multiple graduate degrees in business and survived years of doctoral studies in psychology, all of which undoubtedly has influenced how her characters behave or don’t behave as the case may be.

“I have a website at mertianna.com. My blog is on the website. I hope to get my author Facebook page up soon (which should have been done long ago). Unfortunately I have a huge streak of procrastination in my nature. I think I may have a new pair of pants to hem sitting in my closet from 2010.”

Buy ANGEL OF SYN on amazon in print or ebook form. The book is also available on ImaJinn Books website.

I know I’ve said this before, but I’m an urban fantasy junky. Thanks for an awesome interview and amazing-looking read, Mertianna!

And don’t forget to comment often for a chance at a really cool prize.

Mertianna will be awarding a canvas tote bag printed with the book cover on one side and a saying on the other("Are you a syn-er?"), and filled with goodies plus a $20 Amazon gift card to a randomly drawn commenter during the tour (US ONLY).