Book Tour--ENNARA AND THE FALLEN DRUID 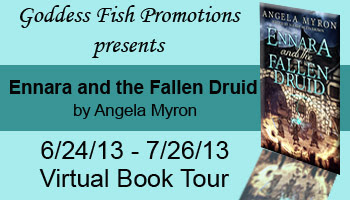 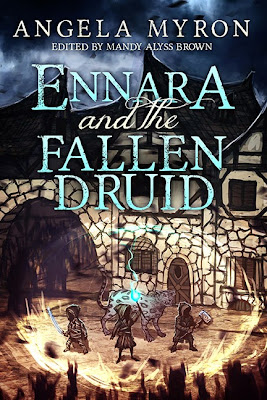 AN INTERVIEW WITH ANGELA

First of all, thank you for hosting me today, Mary. I love your blog and am honored to be here. You have great ideas and views about writing!
---

The Artist’s Way by Julia Cameron. It was almost twenty years ago that my good friend Cat introduced me to the Artist’s Way. Doing my daily morning pages put me in touch with a deeper, wiser self. And there it was, I was addicted to writing! I’ve been doing it ever since.

I write children’s fantasy under the name Angela Myron and science fiction and paranormal mysteries under the pseudonym Chase Theroux.

-ENNARA AND THE FALLEN DRUID:

Eleven year-old Ennara Gaern has a serious grudge against the dragon on her right hand.

Born with a caul—a mask that foretold magical powers—she was immediately inked with the fiendish, fire-breathing tattoo that forces her to study boring texts, cover her hand continuously, and worst of all, keeps her from visiting the beautiful capital city, Dordonne. But her quiet life changes when one night she is attacked by a shadowy demon.

Tork, an old friend and wizard, is enlisted to help. But when he arrives, he informs Ennara’s parents that she is her world’s only hope of finding the legendary Sword of Gisilfrid, which is needed to destroy the curse that is creating the demons. Ennara doesn’t want to leave on the dangerous quest, but when she learns the curse threatens her world, she reluctantly agrees.

Ennara and the wizard begin a perilous journey to the Sunken City, pitting them against dangerous oceans and pirates intent on claiming Ennara’s magic as their own. With only her friends at her side, including the intelligent, aquatic cat Smoos, Ennara must defeat monsters guarding the sword and servants of the Fallen Druid. When her world is covered in darkness, will she know how to dispel the curse?

No spoilers! (A Doctor reference for my fellow Whovians out there ;) ) Here’s a glimpse:

Ennara fumbled the wand as she turned it in her fingers. She scooped it off the floor. Her stomach knotted and her cheeks burned. “Oh, um, I guess.”

She nervously twirled the wand again, this time accidentally tapping the case of trinkets. A lavender light shimmered across the panes, and behind them the objects began to twitch.

“Eeep!” Ennara jumped as the severed hand crawled toward her and tapped on the glass. A long finger uncurled and poked the case open. The appendage leapt from the shelf to the chest, then the floor, and scurried to the door.

Smoos crouched on the lower bunk, wiggled her haunches, and pounced on the hand. She shook it back and forth in the air. It grabbed the cat’s snout and flicked her hard on the nose. She dropped the hand and snorted, rubbing her muzzle with her paw. The hand scampered away and hid behind the girl’s legs.

“You seem to have a penchant for necromancy, young lady.” Tork flicked his curvy black wand at the case. “Merta perape.”

The hand and other charms returned to their lifeless state.

1. Write. Every day, thirty minutes. Make that your minimum. Do you need to write more than that to get a book out? Probably, but anything less than that will get you out of practice quick. Just like triathletes and concert pianists, writers must practice what they do every day. It’s like jogging to keep in shape, but with a keyboard.

2. Always follow your heart. Write for your happiness, not for the market.

3. Buy a writing exercise book and write outside of your comfort zone. Stretch yourself to your limits. You’ll find gold.

4. Find a critique group with experienced writers that don’t hold their punches. Learn to take criticism gratefully first, and learn how to discern which critiques to apply to your manuscript second.

Fantasy and science fiction. I also have a secret love for paranormal romance ;)

That’s not an easy question to answer! I love so many different things I’ve written for different reasons. Some inspire me, some make me giggle and snort, others excite me. But, the most fun I’ve had writing a scene recently was the market scene with Ennara, Kithe and the zombie chickens in Ennara and the Fallen Druid. 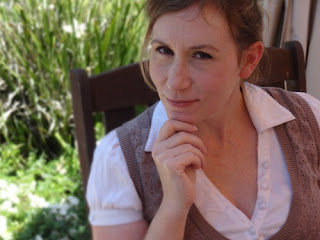 Angela Myron is the author of the middle grade fantasy series Ennara and a stack of technical manuals on everything from nonlinear editing to data encryption. She lives in Whittier, California, with her husband and their twins.

Like many writers, I have a full life in which I juggle many duties and joys. I love to cook, garden, and play with my twins. As a mother to toddlers, I write whenever I am not helping them navigate their day--which typically means in the early mornings and early afternoons when they sleep, and sometimes when Grandma comes to visit.

I was twenty-two when writing became a passion of mine. I've been doing it in one form or another ever since. But it took me a very long time to follow my heart's desire to tell stories.

For years, I simply journaled. I delved into writing articles for newsletters and grant proposals. I settled into technical writing, often finding myself a one-person writing, editing, design, app development, and publication team. I learned the basics of journalism, and finally, when on maternity leave with my twins, I turned to writing fiction.

I am grateful for every reader I have. Writing can be a solitary pursuit, but it can also be a dialog, a meeting of the minds. I invite you to connect with me:

Join my street team! Email me at myronangela@gmail.com to subscribe to my newsletters.

Buy ENNARA AND THE FALLEN DRUID

Please join me in thanking Angela for an awesome interview!

And enter the Rafflecopter giveaways for chances at some amazing prizes.

Angela will be awarding to a randomly drawn commenter during each week on the tour, a wall calendar print from http://www.cafepress.com/ennaraswag (Items can be exchanged for other equal or lesser value items from Ennara Swag on Cafepress.), and will award a t-shirt from http://www.cafepress.com/ennaraswag to one randomly drawn commenter during the tour (US ONLY). 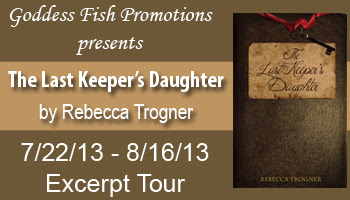 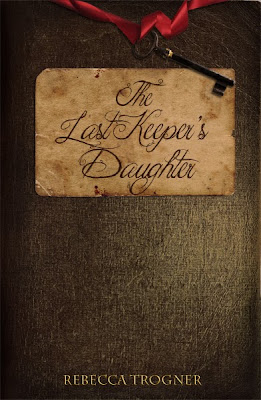 BLURB
Born into old money, Lily Ayres lives at Waverly, her family’s estate situated at the foot of the Blue Ridge Mountains in Paris, Virginia. She is a strange, small, almost mute, young woman who has no idea that her father has given her to the Vampire King Krieger. Walter Ayres is the King’s Keeper and part of a secret society of historians who unearth, preserve, and attempt to understand relics of long forgotten civilizations.

Lily has never felt comfortable in the human world, but after she suspiciously falls down a flight of stone steps, and is healed and claimed by Krieger, she realizes there is another world. In this Other Realm she feels a sense of belonging, and begins to untwine the mysterious event which left her mentally and psychologically damaged. When Walter disappears in England, Lily works with human and supernatural beings to uncover his whereabouts. With each new discovery, she is pulled deeper into the vortex of magic, intrigue, and dark desires that permeates the supernatural world. The revelations revealed unfold a story of deception and betrayal that threaten to tear the thin veil between the supernatural and human world asunder.

EXCERPT
Vampires could not read minds, he hoped. They were secretive and mistrustful, and even Walter with all his knowledge of the Other world did not know the extent of Krieger’s ability. He did know that vampires could recognize a lie or deception by body language. No point in stopping now, he thought, and sat down in his chair to calm his nerves.

“I’ve lived a good life with few regrets. If I should not return from England then so be it.”

“I will contact the Elder. You’re too ill for this assignment.” Krieger reached for his mobile.

“No!” Walter rose halfway from his chair and fell back into another coughing jag. This conversation had depleted his already weakened state. “I must go, for Winston’s sake.”

“Then I’ll speak with my security. I’m sure something can be arranged for Lily.”

Krieger stood and went to the fireplace, giving his back to Walter. “Fathers usually marry off their burdensome daughters. You ask a vampire to claim yours. You do understand the full implication of your request?”

He tried to answer but his coughing returned.

Krieger turned to see him nod. “She has no knowledge of me, I gather.”

“My oath to secrecy has not been broken.”

“Then so be it. Lily Ayres, the last keeper’s daughter, shall be a subject of my realm, and her physical being will be protected as I see fit.” 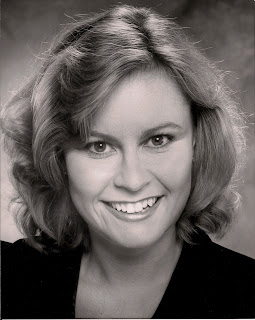 Rebecca Trogner lives in the Shenandoah Valley region of Virginia, and frequently crosses the Blue Ridge Mountains that were the inspiration for Krieger’s home. She always dreamed of being a writer, but got sidetracked by the day-to-day adventures of life. With the encouragement of her family, she has finished her first novel and is currently writing the next book in The Last Keeper’s Daughter series. Rebecca lives with her husband and stepson, and a rescue dog named Giblet. To find out more about the author visit www.rebeccatrogner.com.

Buy it on Barnes & Noble and Books A Million. And buy it/connect with Rebecca on Amazon.

Keep up with the rest of the tour here.

Rebecca will be awarding a $50 Amazon Gift Card to a randomly drawn commenter during the tour.