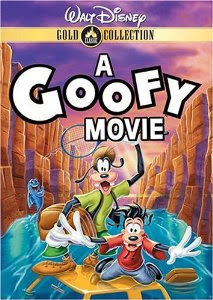 The girl Max has a crush on, Roxanne, asks him if he wants to watch the Powerline concert with her. He agrees, and then his dad, Goofy, announces that they are going on a father/son camping trip during the concert. In an effort to impress Roxanne, Max tells her he’s going to the Powerline concert and will dance with the group. There’s only one problem, that’s not quite the truth.

Can you say win? I can, and this movie is full of it.

The “goofy” in the title pretty much says it all. This movie is laugh after laugh. It also has some serious parts, too, and those serious parts are what make it more than just another ha-ha movie. Max and Goofy learn a lot about what it means to be family. While stranded on a log floating downriver, they sing a great song called “Nobody Else but You” that captures everything about what a good parent/child relationship should be.

Speaking of songs, can I just say that Powerline’s stuff is amazing. I can’t say how many times I wished this song would come on the radio when I was in elementary school…and middle school…and high school…and college…all right, and now.

That’s what I’m talking about, and the scene during the song is just awesome, too.

And then there’s this guy.

“It’s the leaning tower of cheesa.”

Bonus Points: Anyone remember the Goofy Movie miniseries? Pete’s RVs and such. There was a spelling bee episode where Max and Goofy competed against each other. Every time the moderator asked Goofy to spell a word, Goofy spelled “boat.” Finally, he’s asked to spell “boat.”

Let’s talk about ya romance. A Goofy Movie is the perfect example of how to do ya romance without the dreaded love triangle of doom (ah, the doom! lol). Max and Roxanne are adorable. There’s really no other word for them. And what’s keeping them apart? A concert—simple. It’s a series of teen mistakes—lies and half-truths followed by Max confessing. It’s a happy ending, and it’s a fun process. The issues are believable for high school kids. People, take note.
---

And join me next week for Aladdin.

First, I promised to go over last week’s question. Let us begin there.

I gave three characters: Bob Cratchet (A Christmas Carol), Haymich Abernathy (The Hunger Games), and Igor (Frankenstein). Then I asked you to place each in a category of secondary character—light, moderate, deep.

Here’s how I saw them.

Haymich Abernathy: deep
Deep characters are a) possessing of fleshed-out, shown backstories, and b) are important (maybe integral) to the main plot of the story
I see Haymich as a deep character because his backstory is indeed shown. In CATCHING FIRE, we see Haymich from twenty-five years ago—a game victor. We also see that he, like his two protégés, is not one to bend to rules. In MOCKINGJAY, we learn that his family and girlfriend were killed for the stunt he pulled during the second quarter quell and that he took up drinking to deal with the world.
As time goes on, Haymich also becomes more and more important to the story. In THE HUNGER GAMES, he is the mentor figure and not too prominent a role. In CATCHING FIRE he becomes a teacher, friend, and confidant for Katniss. By MOCKINGJAY he has taken control of a segment of the story—this seen at the end of book 2 when he reveals the plan to destroy the arena and rescue Katniss.

Didn’t have Haymich as deep? He grows into the part. And this is an important point to make. Secondary characters in a series may change their role from book to book. In THE HUNGER GAMES I’d argue Haymich is moderate. By the end, though, he’s flying the deep flag high and proud.

Bob Cratchet: moderate
Moderate characters are a) possessed of moderately fleshed out backstories, and b) somehow important to the plot.
If someone asked, you would probably be hard pressed to come up with a character more important to Scrooge than his faithful clerk. From the office to Christmas yet to come, Cratchet is affecting our beloved/not-so-beloved main character. But I wouldn’t go so far to classify Bob as deep.
Let’s break this down. Bob is important to the plot but no more important than the shadows of Christmas past, the other shadows of present, or the shadows of future. All three work equally to let Scrooge make his miraculous change.
But Bob’s backstory, you say. Is present backstory? I’d argue no. Even when Bob’s story is in the spotlight, it is only the here and now.
That here and now is extremely important, though, which leads me to my reasoning for placing Bob in the moderate category. I do not believe there are any deep secondary characters in A Christmas Carol. Scrooge doesn’t let anyone get close enough to be deep. Bob is certainly the closest. I wrestled with him for a while, but I’d file him moderate.

Igor – light
Light characters are a) possessed of an important “here and now,” and b) more often important to subplots.
This is going to be a very short analysis. Igor. He’s neat, but he’s light. Lol

Had different answers? It’s okay. Like everything else in writing, this is a set of guidelines. I’m not the final authority on secondary characters. People see character’s differently. I believe Bob Cratchet is moderate for the reasons above. Disagree? As long as you can back up your answer, that’s fine.

Mary, that’s great. How do we use this?

It’s time for some practical application.

How much “screen time” does each level of secondary character get? How much does the protagonist/reader need to know about them?

To answer these questions, I propose the use of an eye patch. (No, not pirates…well, maybe pirates.) What does this do? Let’s take a character who has an observable quirk (the eye patch) through the three levels of secondary character-dom and see how that eye patch changes the character’s role at each stage.

-Light – The reader/protagonist knows one thing about the observable quirk. The eye patch has one defining quality, as it were. Perhaps it itches.

Now, try it yourself. Pick a trait from the list below (or make up your own) and “eye patch out a character.” Feel free to leave your response in the comments. I’ll provide feedback.

Join me next week for the final installment.