Unofficial Plug for an Author Buddy

I missed my mid-week post this week. Apologies there, I was having some wonderful computer issues.

I’m back now and have an end-of-the-week present.

This is an unofficial plug for an author buddy of mine.

---
Maya Cobb is a classic Gemini. She’s adaptable, affectionate, versatile, intelligent, cunning, and she holds a deep-seated fear of commitment. Which means she’s the perfect match for Aquarius Erica.

Erica Jones, also true to her astrological sign, is friendly, honest, loyal, fiercely independent, contrary, and detached. She hasn’t found a satisfying relationship in ages, and is ready to give up on love, even though she runs a dating service.

After a one night stand, fate keeps throwing them together in the weeks leading up to Valentine’s Day. Maya offers to help Erica plan the Queen of Hearts Matchmaking event, though she doesn’t know much about dating women. Erica quickly realizes that while Maya bolted after their first night, she might be the only hope Erica has to save her business.

Astrology says they’re compatible, but neither woman can be sure.
---

Grab it on amazon, Barnes & Noble online, and Smashwords!

That’s a wrap. Join me back at the Lockbox next week for more authors, books, writing, and fun.

Book Tour--Revenge of the Mad Scientist 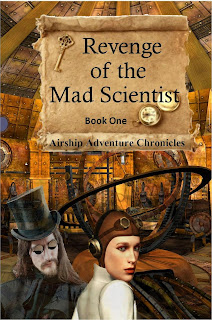 BLURB
When Lady Arabella Trunkett’s father, the High Lord Minister of Urbannia is kidnapped, all clues point to the mysterious country of Gandiss and the world is thrown into political upheaval.

Arabella is convinced the more sinister nation of Carabarras is to blame, urged on by a mad scientist seeking revenge. So, she sets out on a perilous airship journey across a variety of exotic locales to save him, and halt the potential world war.

But airship pirates, secret assassins and slave traders aren’t her only trials. The fickle hand of fate has made the captain of the only airship available for charter, the man who left her at the altar. For eight years she's wished him dead. Now he's her only hope.

EXCERPT
Another scream sounded and then another. A group of people blocked her view and she didn’t hesitate in pushing them aside. She gasped when she reached a body sprawled on the floor and noted a trail of red blood tracking from a side room. She recognized the injured man as Conrad Bellows, her father’s assistant. Horrified, her champagne glass slipped from her fingers and shattered on the marble.

She pushed another man out of her way. What the hell was wrong with everyone standing around like statues while a man needed help? She knelt at Conrad's side. A knife protruded from his back but when she put her fingers on his neck she found him still alive, thank God. He struggled to his side and blinked as he looked up at her.

“Gone,” he whispered. “So…sorry, My Lady…gone.” “Who is gone, Conrad?” She put a hand on his shoulder as panic shot through her.

“Ahh, all in black, don’t know…” He closed his eyes and then slumped on the floor, unconscious.

Belle sucked in a sharp breath. She jumped to her feet and spun around. “Someone call for a doctor and help Mr. Bellows. Where’s my father?”

AUTHOR BIO
Lara Nance grew up and lived in many cites throughout the South. She loves to write in a variety of genres, but the basis of all of her stories is a great tale that will take you on an adventure of imagination.

If you want to escape and lose yourself in a novel, you've come to the right place. Choose your genre and settle in to be entertained. From thrilling mysteries and steampunk tales, to paranormal romance and adventure, she's willing to explore a variety of compelling stories full of danger and suspense, along with a touch of romance.

Having been on the fencing team in college and now living on a sailboat convinces her that she was a pirate in another life, or possibly kin to Errol Flynn… However, due to the unfortunate demise of the romantic pirates of the past, she lives out her fantasies, thrills and adventures in her stories. Lara loves to weave interesting true historical tidbits into her fiction which invite the reader to explore further after the novel is finished.

Currently docked in Norfolk, Virginia (until the wind changes) Lara enjoys living on her sailboat and spends time reading, of course writing, indulging a variety of artistic endeavors, cooking and sailing with her husband, Joe and their Yorkie, Rio.

Lara is giving a$50 Amazon gift card and an original steampunk necklace to one randomly drawn commenter during the tour.

She’s also giving away an autographed map of Arabella’s steampunk world to a randomly drawn commenter at each stop, so be sure to comment here as well as at every other stop on the tour.

But wait, there’s more. If you sign up for Lara’s newsletter on her websitebetween Jan 29 and Feb 3, you will be entered to win an autographed copy of her book as well as an original steampunk necklace!