Since last December, I have hosted book tours for Goddess Fish Promotions. I am continuing this practice, but the location of the book tours is changing. Starting on Monday, Out of the Lockbox will, once again, be devoted entirely to my personal posts. You lucky kids. You get to put up with me.

For those who come for the book tours, fear not. My new blog is up and functioning. It doesn’t have content yet, but it will bright and early Monday morning. Interested, give it a follow at…

Don’t forget about me over here, though. Lockboxes are people too.

Have a good weekend. 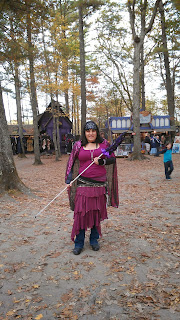 I pray this post meets you well. What a fine Tuesday morning it is, and what a splendid day yesterday was. I partook in my first ever Renaissance fair—the King Richard’s Fair in Carvershire, MA. And I must say it was a sensational time. Please, join me as I relive such an exquisite experience.

The day started at the hour of seven and thirty. I, High Sorceress Vivelan MonClave, rose and immediately began that task for which I had been commissioned—the protection of the lovely Princess Clarabell, a visitor to King Richard’s fair land. For this task, I summoned a protector demon. The incantation was spoken, my staff woven in the proper sequence. A puff of smoke clouded the gate to the demon realm, and from that gate came…Fynrette—the near child demon-ish creature. He/she/it? Insisted on calling me “mummy.” I was not amused. Her highness was, however, and we continued our preparations.

At the hour of nine, we climbed aboard our carriage and set forth on the hour and a quarter journey to King Richard’s kingdom. The time was well spent in merriment and additional preparations for entering a foreign land. Upon our arrival, Princess Clarabell conducted herself with the utmost grace. Fynrette continued to call me “mummy” *gnashes teeth), and we entered the fair grounds.

Our first point of interest was the talented gentleman Jacques de Whipper. He hailed from the far realm of Texas, and entertained us with his tricks of the whip. With a mustache rivaled by none and the most pure French accent heard this side of the great Atlantic, the princess, Fynrette, and I applauded graciously. I shall say here that we came across the gentleman Jack later as well and witnessed him whipping a whip that was, indeed, aflame. Glorious.

From Jack the Whipper’s performance, we next briefly stopped at a clothing shop. Fynrette wished to learn the ways of the corset. The demon wound up fitting one of the garments, and we proceeded to the jousts.

What a fine group of knights to compete in such a grand competition. My companions and I supported the handsome and brave Sir Geoffrey, who stated his purposes in Carvershire as thus: “to kick arrrrrrrs” and “to drink beer.” Well said, Sir Geoffrey. Well said. And well played. Sir Geoffrey went on to win two of the three events in the joust. He may have too won the third had it not come to a tie and his competition not happened upon a spurt of luck. Still, a great man Sir Geoffrey is.

Ah, and a moment to pay tribute to one of the other knights. Though his name escapes me (for who is as important as Sir Geoffrey?), the announcers introduced him as the “well-manicured.” My fellow supporters of Geoffrey and I found this to our amusement and upon laughed. Indeed, we still laughed when “well-manicured” rode his mount past our seats. The knight, apparently not so amused, told us, in no terms of uncertainty, to “shut up.” Now it is clear, I hope, why I supported Sir Geoffrey.

Now, before I tell of the next great entertainment, pause with me to envision the beauty of Carvershire. Trees climb to the sky. Fields stretch to the horizon. Many a crier shouts of entertainments beyond your wildest dreams. Merchants sell their wares. Scents of meat, breads, and desserts fly on the wind, tantalizing the senses. Such a lovely affair.

Ah, of music, you ask. Well, that is where my companions and I traveled next. “Choice of Voice” a competition of song. King Richard himself, his jester, and the daughter of the Master of Ceremonies judged acts who competed to be selected for teams. Each team would then compete so the audience might select the “most evil.”

“Help choose the bad guy.” Sung to the tune of a certain “God save the people” from an entertainment named Godspell. What voices. Their strength was much. Their talents were great. And their harmonies lovely to hear. This entertainment was divided into two portions. The first culminated with the dividing of the teams into the Killer Clowns, the Nefarious Nuns, and the Vicious Vikings.

Another moment, please. I must here make note of the lovely sisters who sang of being Jocular. Their tune matched that of a certain Popular from a musical performance of the WICKED variety.

Upon the conclusion of the first portion of Choice of Voice, my companions and I sought sustenance. As all other elements of King Richard’s realm, feasting was most enjoyable. Exquisite meat and vegetable filled our eager stomachs. With luncheon behind us, we next traveled to a merchant’s stand where we browsed wears of the finest craftsmanship. It was not long, though, before we returned for the finale of “Choice of Voice.”

The second portion of the performance proved as wonderful as the first. The Vikings (at King Richard’s royal command) usurped the opportunity to perform first and were delightful. The clowns performed second, equally splendid. My favorite, however, and the favorite of my companions was the nuns. After all “girls just wanna be nuns…amen.” Though, the clowns deserve special mention for a tune similar in all respects from Defying Gravity, a song from the musical entertainment of the WICKED variety. And, indeed, the clowns won the competition by bribery. Such foul play, but I am certain King Richard will see them properly punished.

With the most evil selected (and then deselected due to a change of heart on the part of the evil-doers), the princess and I traversed the realm until we arrived at the showing of large felines. Finally, I managed to (if only temporarily) rid myself of the mummy-calling Fynrette. The princess and I, though, enjoyed ourselves and learned much about tigers and their existence and history. A chimpanzee also joined the tigers, and I wish to extend a message to the fair woman beside me who spoke “I can’t take it anymore. I want a monkey.”

At the culmination of Tale of the Tiger, the princess and I regained Fynrette as a companion and treated ourselves to lavish desserts of such grand quality. My cinnamon roll was especially delicious. My compliments to King Richard’s many chefs. After filling our sweet tooths’ demands, we browsed again the venders. The princess purchased two silver rings. I must say, they fit her royal bearing. Myself, I found a pendent talisman of a winged horse. I have heard tales that such charms are of assistance in the reading of thesis-like material, especially when the thesis-like material contains winged horses. I deemed it a perfect match and was more than happy to support the economy of Carvershire.

Oh sad day. My telling of events is almost at an end. But first, a moment to mention two dear friends I made. Of all the performers in King Richard’s glorious realm, none stole my heart so much as a blonde-haired minstrel and his guitfiddle. I danced to his folk music, and he sang for me. We bid one another a happy festival and saw one another no more. But I must here give him compliment on his talent—both instrumental and vocal.

And the last. I dare say I may have been a bit too overprotective of the princess in the beginning. As the day wore on, I became less rigid, but in the beginning, a man came too close. I told him I would turn him into a toad, and he responded in kind as such: “Not again.”

And this concludes my retelling. My only wish is that I could have done more. I must here thank King Richard and all the people of his realm for a day like no other I have ever experienced. I intend to return in future years to the festival.

And to those who followed this retelling, thank you for your time and attention. I must now return to teaching Fynrette not to eat babies. She is stubborn but developing nicely. I hope to see you here again soon.

Vivelan
Who may be found in the bird’s twittering place @desantismt.

P.S. Many awards to the man who dressed in a bathrobe and brought a towel.

Posted by Unknown at 4:30 PM No comments: