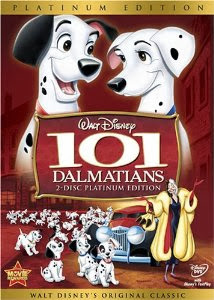 IMDB BLURB
When a litter of dalmatian puppies are abducted by the minions of Cruella De Vil, the parents must find them before she uses them for a diabolical fashion statement.

And I really want to know what kind of sick woman thinks skinning dogs is okay.

Apparently Cruella De Vil (cruel devil, for anyone who’s slow like me and didn’t figure this out until years later. Don’t look at me like that. I never gave it much thought) does.

This movie is adorable. There really isn’t any other way to describe it. There are a bunch of lost pups trying to find their way home. It’s a journey plotline. (My MFA tuition at work, there.)

Seriously, I learned quite a bit from this movie. Aside from not to trust strange men who show up at your door with a sign that misspells electric, there’s a lot of family-oriented stuff in this movie. Take care of your own and they’ll take care of you. Sitting in your house all day makes for a lonely existence. I gest, but don’t let people into your home. Don’t trust everyone who has a semi-convincing story to tell. (Not that Jasper and Horace were semi-convincing, but you know what I mean.)

It’s these kinds of classic films that remind me what Disney is all about. I’m glad this one came first in the lineup. It’s a good place to start. It’s the perfect mix of old and newer Disney, and it has 101 built-in reasons to smile.

Moment of Digression – Did anyone else own the play-along-with-the-movie computer game? I had it on Windows 98, I believe. Talk about the Stone Age. Anyway, I need to mention the segment where the Dalmatians all roll in the soot to disguise themselves as black labs. This was my favorite scene in the movie. It was great. After forever of traipsing through the snow, hiding, and generally being exhausted, the puppies get to play. And not only do they get to play, but they have mom and dad’s approval to get dirty. Every kid’s dream.

This segment in the game, however, was far from entertaining. For those who don’t know, the puppies got disguised through the following method. Player clicked on the pile of soot, and the mouse turned into a smaller pile of soot. The puppies then came on screen (one at a time, mind you), and you clicked on each of them with the soot pile. It colored the puppy black, and said puppy ran to the truck.

This had to be done for 99 puppies.

I was five (eight at the oldest). What five, six, seven, or eight-year-old has that kind of attention span? I didn’t, but I did color all 99 puppies once. I was curious. I was rewarded with the following exchange set to a black screen.

All the other puppies in unison: “One.”

I started this a while ago, and it sort of died. Well, I’m bringing it back for MCS because I’m a writer, and I blog about writing. Disney movies can be related to writing. So each Saturday I will end with one thing the given movie can teach us about the craft.

For 101 Dalmatians, it is suspense and action. This movie moves. Puppies are kidnapped (boom). Search begins (boom). Puppies try to escape (boom). Mom and dad come in at the right moment—in an awesome scene—I might add (boom).

And on and on. This movie hits all the beats. You’re sitting on the edge of your seat till the very end. You want these dogs to get home, and you want to see that wanna-be-dog-skinner-woman lose.

That’s what I’m talking about, people.

Join me next week for A Goofy Movie.

As a 5 (fifth-res student) at Seton Hill, I was required to give a forty-five minute teaching presentation on a topic relative to writing. I chose secondary characters, and since my presentation went well, I will now share what I learned with the internet. Because that’s how I roll.

Dumbledore is to Harry Potter as Obi-Wan Kenobi is to….

If you said Luke Skywalker, you would be correct. (Sorry, people who said Chewbacca.)

You know this because Dumbledore and Obi-Wan are both memorable, well developed secondary characters who perform specific roles in the story.

I’m so glad you asked!

But be that role mentor, friend, or partner in crime, all secondary characters need to be memorable and realistic. And they need to interact with the main character as people in real life do. After all, we don’t know everyone in our lives equally, and not all people in our lives help us through each episode we face in the same way/amount.

To illustrate this concept, I created three types of secondary characters. And here they are with examples from Harry Potter.

-Light second (McGonagall) – A light character’s “identity” (who they are) is somewhat important to the story, but their here and now is all that really matters. These characters may have a moment or two where they interact with the main plot. It’s more likely, though, that they’ll interact with subplots.

-Moderate second (Neville Longbottom) – This is the center “catch-all” category. Moderate seconds’ backstories are fleshed out to varying degrees. Actions and context clues give an idea of who the character is. These guys interact with the main plot and are important for the story in varying ways/degrees.

-Deep second (Snape) – These guys are almost primary characters. Their backstories are fleshed out for the reader to see, and they are important (maybe even integral) to the main plot.

Below are 3 characters. Which category do you think each falls into? Feel free to drop your guess (and reasoning, if you’d like) in the comments. I will go over them briefly next Wednesday before moving on to Practical Application.

And join me next Wednesday for more secondary character fun.