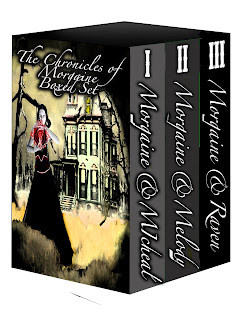 BLURB
Readers who love books about magic and romance will love this special ebook "boxed set" of the first three books in a spellbinding series - all for just the price of the first book plus one dollar more! Start reading this irresistible saga of a modern witch who couldn't free herself from an ancient love. Meet the bad girl of romance, Morgaine the first anti-heroine! When they had been lovers hundreds of years earlier, Michael had sold his soul to the devil for immortality. Now that they are lovers once again, Morgaine tries to outwit the demon Asmodeus by offering him the pure soul of the woman Melody in exchange for Michael's. But when Michael falls in love with Melody, Morgaine unleashes a fury on them the like of which even hell has never seen. And Morgaine's fury threatens to shatter even the will of Hell's mighty King. "A fine, original new work of dark fantasy," raves Horror Sagas!

AN IN-DEPTH LOOK AT JOE 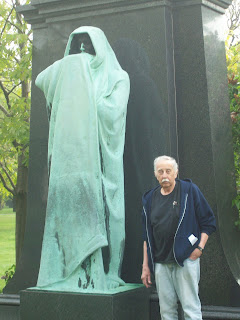 “I've loved science fiction and fantasy from the time I learned to read. My hobbies, besides writing, are traveling, adventure game playing and do-it-yourself projects. Before I retired, I was a technical writer working for a major computer manufacturer.

I believe my love of reading stems from my parents and grandparents, who were all avid readers. As a child, one of my favorite things was hanging out at the library or browsing in flea markets for books I could afford. I also liked mathematics and science, especially astronomy. When I was twelve or so, I discovered the pulp magazines. They had garish covers and were printed on blotting paper, but the stories inside were marvelous. In these magazines, I learned to love such writers as Isaac Asimov, Ray Bradbury, Robert Heinlein, Robert Silverberg and so many others.

I married a girl who went to the same high school as I did, and we've been married over fifty years now. We have four wonderful girls, ten grandchildren (who are now adults ) and one spunky nine-year-old great-granddaughter. In 1993, I retired. That's when my fiction writing career really started.

Three series of paranormal fantasy novels of mine, called The Morgaine Chronicles, Raven Lenore, Psychic Investigator, and my humorous fantasy saga The Books of Retslu have been published as ebooks by Futures-Past Editions. Futures-Past has also published all my novels including, The Isaac Project, For Love of Kumiko, Pawns of Tomorrow, Star Tower, Out of Time, Takeover, The Artifact, Pawns of Tomorrow, The Laws of Magic, Castle Darkest Night and Dinner with Dracula. All are available at Amazon and Barnes and Noble, as well as other online ebook sellers.”

EXCERPT OF CHRONICLES OF MORGAINE
Michael stood not six inches away, and I became lost in those wonderful, terrible eyes of his. My heart beat wildly, and I gulped. At that moment I would have done anything – absolutely anything, regardless of how outrageous – that he asked. For one instance I was his absolute slave only waiting for his command.

Thank God, it was a simple one. "Please stay a while, Melody. Have a brandy with me.”

We conversed about various subjects as we slowly sipped our drinks. When I finished, I set the glass down with some finality. "I really must go now. Work tomorrow." The last drink made me feel strange after the others we had throughout the evening, not tipsy or anything, just strange. I certainly did not want to get high at this point. "Could you call a cab, please?”

"Parting is such sweet sorrow," he whispered. His tone was only slightly mocking. If those had not been the words to a corny old song, I believe he meant them literally.

In the cab, my thoughts were in a whirling disarray. Was I falling in love? C'mon, I told myself, a grown woman does not fall in love after seeing a man twice. But I was lying to myself, and knew I was lying. What was it about him? His charm? His rugged good looks? Something. Maybe his eyes. Whenever I thought of him, they were the first thing I recalled. There was a hypnotic quality about them. But there was something else. He mentioned reincarnation. Was that it? Were we lovers in some past life? I shook my head to clear it. The thing was, when he had planted that light kiss on my lips, it was as though an electric shock had jolted my heart.

Want to buy CHRONICLES OF MORGAINE?

Find it on amazon and Barnes and Noble.

Looks pretty neat. Thanks for joining us today, Joe!

And don’t forget to comment for a shot at a prize.

One randomly drawn commenter will win a $25 Gift Certificate to Renaissance EBooks, Inc.

Writing in this World

This post will relate to writing, as indicated by the title, but first please join me in a moment of silence for all those affected by the Boston Marathon bombing this past Monday.

When 9/11 hit, I lived in Massachusetts. I was only 11—days from turning 12, actually—but I remember. I remember finding out the planes came from Boston. I remember thinking the crashes were accidents. I remember not understanding. I remember feeling safer because I didn’t live in New York or Washington D.C. I was a kid. Not living in the places affected was a world of difference to me.

Two days ago, my home state was attacked. It doesn’t matter the source. My home state, my home, was attacked. People died running the Boston Marathon, an event that I always knew about but never attended. An event that made up part of the state I resided in until a little less than a year ago. A state that is still and will always be my home.

None of my friends or family members were injured in Monday’s events. For that I am more thankful than words can express. I also cannot put into words the feeling you feel when your home is attacked. I used to live 15 miles north of where the bombing took place. 15 miles. That’s not a long way when you look at the size of the planet. I walked Boston’s streets, rode its subways, sampled its restaurants, browsed its stores. I performed at its concert halls. I lived under its sky. I made it and that small city 15 miles north of it my home. That feeling never leaves.

And so when that home is attacked, there’s a feeling of breaking. You repair it. What else can we do but repair damage? But you don’t forget. 12 years ago when 9/11 hit, I didn’t understand. I do now. I understand in more ways than I thought I could in 2001. Your childhood home is a place that lives inside you. At least it is for me. It hurts beyond pain to see it broken.

---
I write fantasy. I’m writing the last few chapters of my thesis for Seton Hill this month. There is violence. There is death. There is loss. I’ve heard it asked of writers “How can you write about such terrible things when you live in this world?”

Let me offer my answer. I prefer my violence, death, and loss on the page. I write to tell a story. I write to deal with life. I write to hopefully give others a way to observe life. I write violence because it is a part of life. Do I like it? No. The world has known war since it began. I think it’s time it knew peace, but I’m not so much of an idealist to believe that will happen soon.

Boston—my heart to you always.

Book Review: UNDER THE NEVER SKY by Veronica Rossi 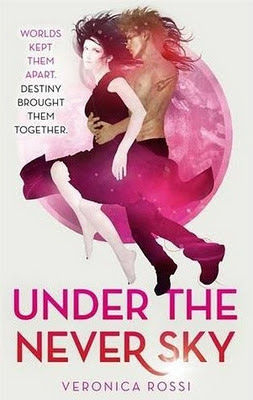 Aria has lived a sheltered life in the enclosed city of Reverie, where she spends her days hopping from simulated realm to simulated realm. When she is banished to the outside for a crime she didn’t commit, Aria is ripped from her pampered life and forced to survive. She forms an unlikely alliance with Perry, a hunter who sees his opportunity for redemption in Aria.

Rossi creates a rich, detailed world. The sky, known as the aether, is a character. It’s roiling colors and powerful storms reflect the action, shifting through different types of turmoil as tensions increase.

Aria and Perry are thrown together from the very beginning. This is made more apparent by Perry’s sire abilities—he can scent emotions. In a way, this gives a deeper insight into Aria’s character, as we see her emotions both from her chapters and from Perry’s interpretations of her feelings. As the two journey across the land to find Aria’s mother and Perry’s nephew, their relationship grows. Things begin rocky and eventually blossom into young love. The transition seemed a little too fast and lacking in believability.

I also would have liked to see more of the realms. Through the course of the book, Rossi has Aria fling around terms like “in the real,” and while the words themselves fill out her world, we don’t see anything of the realms until several chapters into the action.