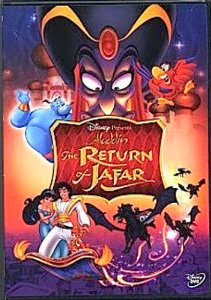 IMDB BLURB
Jafar comes for revenge on Aladdin, using a foolish thief and Iago's treachery to find a way back into power.

I always felt that Iago didn’t get to do enough in the first movie. So when this came out, I was stoked (only, you know, the appropriate word for stoked in the ‘90s). I also felt that Jafar’s storyline was left unfinished. The last we see of him, he’s arguing with Iago in his lamp. The lamp gets tossed away, but my 6-year-old brain realized that someone could theoretically find the lamp and set Jafar loose. And then Disney said “Why yes, 6-year-old Mary, that’s exactly what happens.”

Of course, the person who sets Jafar loose has to be Abis Mal, who I mentioned in last week’s MCS. Mal was the most-occurring villain in the Aladdin TV series (and also the most bumbling). I mean, come on, he wanted to wear the sultan’s “big hat.” He had a sidekick, Haroud—the brains of the outfit—who somehow managed not to ditch Mal at the first sign of more intelligent company.

Side Note: Other Aladdin TV series villains include Mirage (evil cat lady), Mechanicles (the OCD mysophobe), Mozenrath (the power-hungry sorcerer), and the Al Muddy (the, umm, mud creatures), among others. I also feel the need to mention Sadira—a female street rat who tries and fails to win Aladdin’s love. She figured prominently in some of my favorite episodes, one of which was the one where she makes a sand giant who, after being asked repeatedly to dispose of/imprison people, says “Look, I smash things. That’s it.”

Return of Jafar also had some great songs. I mean, they weren’t A Whole New World or Prince Ali, but they were good. Take this one for example.

Gilbert Gottfried got to sing. That didn’t happen in movie 1, and it made me happy here.

Complete with lead-in and follow-up scenes. This makes up for the lack of real Jafar song in movie 1.

So, casting. Did you know 6-year-old children are extremely perceptive when it comes to the voices of animated characters? I knew almost the moment Genie started speaking that he wasn’t the same actor. Granted, I didn’t know who played him at the time. I just knew it wasn’t the same guy as in the first movie.

Strangely enough, Disney did get the original actors/actresses back for Jafar (Jonathan Freeman), Iago (Gilbert Gottfried), and Princess Jasmine (Linda Larkin). Though Liz Callaway (not Lea Salonga) was Jasmine’s singing voice in Return of Jafar, and as far as Iago goes…how does one presume to replace Gilbert Gottfried and not have the audience notice?

Hi, short but sweet here. Disney did it. Writers, take note. If you want to bring back a character that was defeated at the end of the last book, make sure it’s doable. If Jafar had died and then Disney made The Return of Jafar, bad things would have happened. But Jafar was only imprisoned and, I might add, imprisoned in a way that made it, not only possible, but likely that he would be freed.

And join me next week for Aladdin and the Forty Thieves.

It’s been pretty serious around here the last few Wednesdays (well, except for the pirates). And so as Rogers from “The Swan Princess” says “Liven it up a bit!”

If you’ve noticed my Saturday posts (the Disney ones) and the description at the top of my blog (avid Disney lover), you know I, well, like Disney. It turns out I also like writing…

And when you put the two together, wonderful things happen.

If you don’t recognize this (for shame! *deep breaths* I’m okay), it’s from Disney’s newest animated feature, Frozen. It’s a play on the song Let It Go sung by Elsa, who is played by the wonderfully talented Idina Menzel. Having done some writer song parodies before (most notably Read My Novel, Maybe, a parody of Carly Rae Jepsen’s “Call Me Maybe”) I jumped at the opportunity to let my creativity loose on something other than my thesis. I dare say I had a bit too much fun, and I must thank Nikki Smith for inspiring the lyrics below. Follow her on Twitter @NikkiMSmith218. She’s pretty awesome!

Hit play and read, or sing, along with the song.

Page glows white on the laptop tonight
Not a marking on the screen
At failing at creation
It looks like I’m the queen.

The Muse is howling “put these swirling words outside.”
Couldn’t get them down. Heaven knows I tried.

I don’t care
What the screen will say
Let the words rage on
All first drafts kinda suck anyway.

It’s funny how fast the words come
Once you pass the wall
And the fears that once controlled me
Can’t hold me back at all.

It’s time to see what I can do
To ram writer’s block and break through
Just write. Not wrong, no rules for me.
I’m free.

My fingers fly across the keys, the letters pound.
My soul is spiraling in sentence fragments all around.
And “the end” hits me like a million dollar blast.
I’m done. I can look back.
Revise what’s in the past.

Send it off
My crit partner’s way

Bring the feedback on