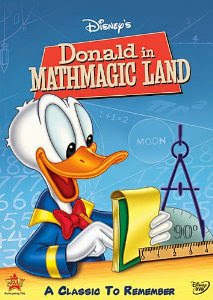 As the title suggests, this Disney animated short is about Donald Duck learning about the history, use, and application of mathematics.

I watched this before fifth grade. So when we watched it in fifth grade and then had to write a report on it, I felt ahead of the game in that way only experienced by eleven-year-old children who have unintentionally done homework before hand. Granted, I’d only watched the movie, not written the paper, but to me, that was all academic. Literally and figuratively. I wish I still had the report. I drew the absolute worst cover for it. I decided that, since the movie was about math and various games that use math, I would draw a bunch of different games for my report cover. I had a blue and red chess board and a terrible rendition of an air hockey table. That’s all I remember.

But yeah, parents, let your kids watch this. It’s a fun and engaging way to learn about the history of math. It also features classic Donald Duck. Who doesn’t love classic Donald?

Less fun fact, both of my parents can do amazing Donald Duck impressions. I cannot, and I wish to know what cruel fate of genetics kept me from receiving this skill. *sigh*

Other less fun fact, my family owned a pool table when I was growing up, and I thought it was awesomely cool when Donald learned about the math involved in billiards.

But I digress. Watch the movie.

Writers can do math, too. That is all.

Join me next week for Dumbo.