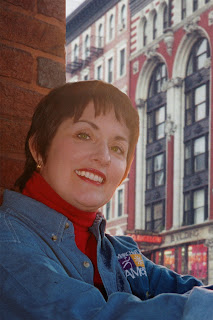 It’s interview time. I have with me today one of my professors from that MFA in Writing Popular Fiction program that I talk about a lot, Victoria Thompson. She’s here today to talk about her and her upcoming release, MURDER IN CHELSEA. Please give her a warm welcome.

Edgar® Nominated author Victoria Thompson writes the Gaslight Mystery Series, set in turn-of-the-century New York City and featuring midwife Sarah Brandt. Her last book, MURDER ON FIFTH AVENUE, has been nominated for an Agatha Award. Her latest, MURDER IN CHELSEA, is a May 2013 release from Berkley Prime Crime. She also contributed to the award winning writing textbook MANY GENRES/ONE CRAFT. A popular speaker, Victoria teaches in the Seton Hill University master's program in writing popular fiction. She lives in Central PA with her husband and a very spoiled little dog.

Oddly enough, Louis L’Amour’s westerns were what started me on my first novel. Reading them re-kindled my childhood love of cowboys and the Old West. My first 20 published novels were Western Romances. I love writing historicals, which then led to my being asked to write the Gaslight Mystery Series.

-What genre do you write?

-About MURDER IN CHELSEA. 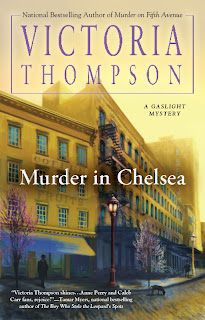 MURDER IN CHELSEA, Berkley Prime Crime (A May 2013 release). Frank Malloy and Sarah Brandt solve the mystery of Sarah’s foster daughter Catherine’s birth and finally locate her real parents. All does not go well, however, and someone ends up dead. Sarah must protect the child she loves like her own while deciding if she has the courage to give her up to her real parents.

This isn’t really a spoiler, but Frank and Sarah finally declare their love for each other and Frank proposes.

-For other aspiring writers, any tips?

If you want to be a writer, first you must be a reader. You will learn more from reading extensively in your chosen genre than you ever will from a how-to book.

I love mysteries and thrillers, especially those with historical settings.

But seriously, folks, my favorite scene to date is the one where Frank proposes to Sarah in MURDER IN CHELSEA.

If you haven’t, read all the Gaslight Mysteries, and keep an eye out for Murder in Chelsea. It hits shelves on May 7! 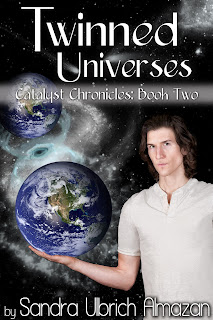 In the aftermath of a family tragedy on 21st century Earth, Paul discovers he’s the clone of Sean Lyon, his great-great-grandfather and a famous TwenCen musician. Suspecting his mother’s death was no accident, Paul comes up with a plan to trick the answers out of the great-uncle who had him cloned. But in order to make his plan work, Paul needs help from Sean himself—and Sean’s time is running out in the TwenCen universe next door. Although Paul’s family lives on the spaceship that travels between the universes, he’s never been allowed on TwenCen Earth. Now, with the help of his friends, his disguise-creating holoprojectors, and a quantum quirk, Paul must make his way to Sean while evading other time travelers who fear he’ll change the history of the TwenCen universe. If Paul is to achieve justice, he must not only risk his own life, but the wormhole connecting the universes. “To be or not to be” was a simple question in comparison....

EXCERPT
Paul didn’t care what Dad thought; Great-Uncle Jack was the most promising suspect. He hated Mom, so he’d have no problem getting rid of her, especially if it made Paul more like Sean. How could Dad expect him to forget about the matter when it was his own fault? How could he expect Paul to do nothing? He’d be eighteen in a couple more months, old enough to handle responsibility. Maybe he would be useless with the genetic research, but there had to be something he could do. But what?

All I’m good at is acting, and that doesn’t matter out here. It’s no help being in space when Great-Uncle Jack is back on Earth. Paul broke down the cardboard boxes for composting. But maybe when I get back….

Hamlet had staged a reenactment of his father’s death to gauge his uncle’s guilt by his reaction. Perhaps Paul could do something similar. For a moment he pictured himself playing his own mother, accusing her uncle. The image made Paul smile, but he was too tall to play her convincingly. There was only one role he could manage, the most dangerous one.

If Paul proclaimed on returning to Earth that he was willing to become a Sean impersonator, Great-Uncle Jack would be so ecstatic he might let his guard slip. If he wanted Paul to write songs, he’d write one about his mother and play it for the world. Perhaps that would make Great-Uncle Jack confess. All Paul had to do was learn a role he could get trapped in. 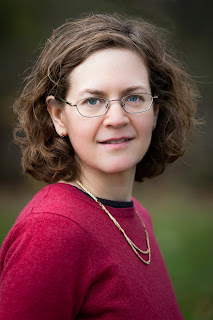 ABOUT SANDRA
Sandra Ulbrich Almazan started reading at the age of three and only stops when absolutely required to. Although she hasn’t been writing quite that long, she did compose a very simple play in German during middle school. Her science fiction novella Move Over Ms. L. (an early version of Lyon’s Legacy) earned an Honorable Mention in the 2001 UPC Science Fiction Awards, and her short story “A Reptile at the Reunion” was published in the anthology Firestorm of Dragons. She is a founding member of BroadUniverse and a long-time member of the Online Writing Workshop for Fantasy, Science Fiction, and Horror. Her undergraduate degree is in molecular biology/English, and she has a Master of Technical and Scientific Communication degree. Her current day job is in the laboratory of an enzyme company; she’s also been a technical writer and a part-time copyeditor for a local newspaper. Some of her other accomplishments are losing on Jeopardy! and taking a stuffed orca to three continents. She lives in the Chicago area with her husband, Eugene; and son, Alex. In her rare moments of free time, she enjoys crocheting, listening to classic rock (particularly the Beatles), and watching improv comedy.

Sandra can be found online at her website, blog, Twitter, and Facebook. Upcoming projects from Sandra include a standalone fantasy story called “The Fighting Roses of Sharon”; Twinned Universes, the second book in the science fiction Catalyst Chronicles series; and Scattered Seasons, the first book in the fantasy Season Lords series.

Twinned Universes can be purchased online at Amazon, B&N, and Smashwords.

Have to say, Hamlet is one of my favorite Shakespeare plays. Love The Reduced Shakespeare Company’s rendition and love finding new books that include the play!

Want more on Twinned Universes? Follow the rest of the tour here.

And don’t forget to comment often for a chance at an awesome prize.

Sandra will award one randomly chosen commenter the choice of a $50 Amazon gift card or a gift pack of all of the following items related to Twinned Universes: two Shakespeare mugs, a Sears tower pendant, a book by Carl Sagan (Pale Blue Dot: A Vision of the Human Future in Space), and a signed copy of the first book in the series, Lyon's Legacy.