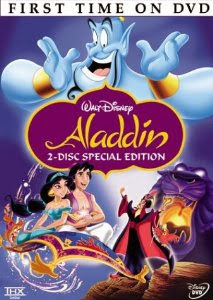 Aladdin (the street urchin) crosses paths in the square one day with Princess Jasmine (who is disguised as a peasant). They fall for each other, but Jasmine can only marry a prince. And Jafar, the sultan’s grand vizier, has his own plans for the “diamond in the rough” Aladdin.

Ah here we are, traditional Disney with a princess and a, well, almost prince—will be prince. 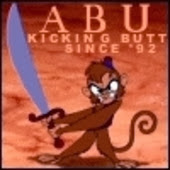 I had just one problem with this film—the scene after “A Whole New World.” Jafar has Aladdin tied up, gagged, weighted down, and thrown in the lake. Right, k, issues much? And now he’s going to tell us he was happy about it.

Really, Jafar is pretty much a bastard, but he’s really good at being a bastard. It’s a shame he Blew It. Or maybe that’s not a shame.

Genie—win. Of course, Robin Williams is always win in animated movies. Did you know he also played the storyteller in the beginning?

Bonus Points: The Mini Series
The episodes were apparently meant to take place after the movie’s end point, you know, after Aladdin is officially engaged to Jasmine. Yet despite this, he is still wearing the street rat clothing. Maybe Jasmine liked seeing her boyfriend's glorious pecks?

Anyway, there was one episode where Genie got split into the different parts of his personality. The villain in this show was Abis Mal (abysmal…clever, there). At one point, Abis Mal meets up with Genie’s fear and says the following.

Double Bonus Points: It’s gonna be a Broadway musical!
See this post for more info, but yes, Disney is bringing another full-length, animated feature to the big stage. It’s currently in Seattle, and here’s a sneak peek.

Triple Bonus Points: The Video Game
Remember this from way back in the days of Sega Genesis? I know, the dark ages.

From the “escape the cave of Wonders” level, one could unlock the bonus carpet ride. If memory serves, you got one chance to get as far as you could. You had help, though. Genie would point (up, down, or center). At least he would at the beginning. After a while, he’d sometimes give a question mark, and Mary would say…

What the heck is this question mark?

And then Mary would promptly fail the level.

While speaking in third person.

Typical me. And gotta love that 8-bit music. No sarcasm here—I really do think the music is awesome. Lol

Let’s talk about realism. I don’t mean accuracy to real life or the original story. We all know Disney doesn’t always keep true to the original. What I mean is realism within the story. At the end of this movie, the following exchange takes place.

Sultan: “It’s that law.” *grumbles*
Jasmine: “Father?”
Sultan: “Well, am I sultan, or am I sultan? From now on the princess will marry whoever she deems worthy.”
Jasmine: *runs into Aladdin’s arms* “Him, I choose…. “I choose you, Aladdin.”

Adorable, yeah. Also a “minor” logic issue. If you’re anything like me, you walk away from this scene thinking “aww” and then thinking “wait, if the sultan had undergone this ‘highly complex’ epiphany earlier in the movie….”

See what I’m getting at here?

If there’s an obvious, one word/sentence answer to your entire plot, it’s time to rethink. If the sultan had figured this out sooner, Jasmine could have married Aladdin when she first met him, achieved “the power to get rid of you,” and lived happily ever after.

Side Note: Why does Jasmine need to marry before she can be queen? Her father’s ruling single. Granted, he’s not the brightest bulb/isn’t doing the best job, but still.

And join me next week for Aladdin II: Return of Jafar.

Thanks for sticking with me the last few Wednesdays. I put a lot of work into this teaching presentation, and I hope it’s been helpful.

And now for a few more things.

-Word choice - At first glance, this seems obvious. If a character likes someone, they will refer to that person with positive words. If they dislike someone, they will use negative words. This is true, but let’s take this a step farther into the land of uncertainty. What happens if you have two characters who both dislike the same person but in slightly different ways. Here is where word choice plays a bigger role. “Irritates” carries a slightly different meaning than “aggravates,” for example.

-Character descriptions - People see people differently. Let’s take a typical pretty blonde girl as our secondary character. The guy who likes her might describe her hair as “glowing like sunlight” or “sparkling like gold” or, hopefully, some less cliché comparison. By contrast, a girl who doesn’t like our blonde secondary character might describe her hair as “of course, perfect” or “heaven-forbid-a-strand-out-of-place style.” Big difference there.

-Name giving - If it is natural and fits the story, have each POV character call a given secondary character something different. Make sure the given name fits the POV character, too. Example: In my thesis, all three of my POV characters interact with and talk about my heroine’s father—who is Captain of the Royal Guard. My heroine thinks of him as “father” and will refer to him as either “father” or “sir,” depending on the situation. My hero thinks of the man as “captain” or “Captain Rothwell” and will refer to him as either. My villain is a special case (and I don’t just mean that in terms of what he calls people). He has a love/hate relationship with my Guard Captain. He needs the man, but he hates that he needs the man. My villain will think of the man as, well, “the man” (sometimes), “the captain,” or “Rothwell,” (the last-name treatment). By contrast, villain almost always addresses him as “Captain” with the respect implied. Confusing, maybe, but it helps remind me (and hopefully the reader) that Captain Rothwell, though a secondary character, is a person of many facets.

Try this on your own.

Describe a girl’s father from the perspective of both the girl and the girl’s love interest. Use word choice, character descriptions, and name-giving to differentiate between the two POVs. Again, feel free to leave your response in the comments.

I love your enthusiasm.

Check out these links for some more about secondary characters and/or well-rounded characters in general.

-Suzette Saxton Character Interview – querytracker
This is meant for main characters, but it can be used for secondary characters as well. If you know all the answers to these questions, you can pick and choose what goes into the story. Character creation is much like world building. There is more to the characters than may make it into the book.

-The Crimson League – blog post
And finally, here are some additional, interesting tips.

Now go forth and create many great secondary characters!