MCS #11: Beauty and the Beast: The Enchanted Christmas 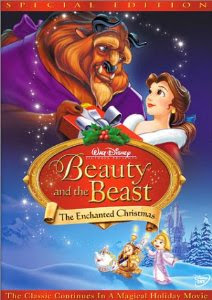 Beauty and the Beast: The Enchanted Christmas (1997)

IMDB Blurb Belle prepares the castle for Christmas against Beast's wishes, trying to bring him happiness for the season. Forte, a pipe organ, fears that Belle's plans may eventually bring about an end to the curse... the curse that brought him more importance in the Master's life. Forte uses Fife, a flute who desperately wants a solo, to destroy Belle's plans and get rid of her.

K, I have not seen this movie in a very long time. That said, I remember parts, so here goes.

All the original, awesome voices were back (except Chip—kids and such), and we even added some new, talented faces. Forte is played by the amazing Tim Curry, who has been in so many movies/TV shows I love that I can’t even count.

There are more, but those are the big ones.

Bernadette Peters also makes an appearance as the Christmas angel…Angelique (more original naming here. Cogsworth the clock, Mrs. Potts the teapot….) Anyway, Angelique seems like a perfect name for a character voiced by dear Bernadette. Now, I have no problem with Ms. Peters. Her singing voice drives me a bit nuts, but she can also deliver quite the beautiful song. Behold.

That’s just lovely, and the harmonies with Paige O’Hara only make it better.

Randomly, I wanted more time with the prince in human form. I can’t help it. I’m a sucker for guys with long hair, and he had long hair. I’m also torn, though, because I have no idea what kind of plot would revolve around Belle and Prince Adam (apparently that’s his name) as a human. Much as I love his hair, I don’t want a nonsense movie for the sake of it.

All in all, this is a touching story about Christmas, the meaning of family, and home. It begins with everyone as humans and Mrs. Potts telling the story. According to her, this takes place after Beast rescues Belle from the wolves (that he only had to rescue her from because he went all…

Yes, I just wanted an excuse to use that graphic again). Still, it’s a fun movie, and I need to hunt down a copy and watch it sometime.

Bonus Points: The Broadway musical of the original movie I forgot to mention two weeks ago

The original actress who played Belle (Susan Egan) is the voice of Meg in Hercules and the singing voice of Angel in Lady and the Tramp II.

When inserting events into an already-told story, make certain they fit both logically and time wise. This story works where Mrs. Potts says it fits. That was winter in the original movie, and the entirety of Enchanted Christmas takes place (unsurprisingly) during winter.

Last time: Beauty and the Beast

And join me next week for Belle’s Magical Tales of Friendship (yes, that was a real thing).

Yes, you read that post title correctly. I passed in my thesis!

Pages: 384
Words: 101,101 (no, I did not cheat to get that number. Cross my heart)
Chapters: 31
POVs: 3
Body Count: 5 named characters, lots of unnamed ones
Tears shed throughout process: too many to count
Total of cut words: I have no idea, and I cannot count right now. I will, though. And I’ll report when I get there. I’m very curious. Heh

So now I wait for overall feedback and the final verdict. Part of me wants to hide under the bed. The other part thinks that’s silly. And then there’s a small part that thinks I should be dancing on the roof…except I’m just too freaking tired.

K, signing off for a day of doing nothing, and I do mean nothing.