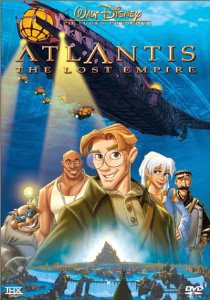 As of yesterday afternoon, I’d seen this movie once…in college…five years ago…while in the company of a friend and his extremely recent x-girlfriend who he was trying (rather unsuccessfully) to get back with.

As a result, I watched it again with a friend last night. Post second viewing, I felt much more prepared to discuss the film, considering pre-second viewing I remembered roughly almost nothing.

Milo + Kidammanoganosh…or however you say that. I like Milo’s nickname idea, so I’ll stick with Kida. They’re cute. Well, they’re cute later. At first, they’re kind of grr face at each other, but it’s grr face in a cute way?

Also, how did he hold his breath for that long?

Voices. David Ogden Stiers makes a cameo appearance as Mr. Harcourt. Wondering who that is? He’s the guy who’s been in more Disney movies than you probably realize, including Beauty and the Beast, Pocahontas, and The Hunchback of Notre Dame.

Speaking of names, this is a character in the movie, not an actor, but…Thaddeus Thatch?

Do parents realize what they do to their kids?

K, before I get to the end, I need to mention Atlantis II quickly. It, um, well, it was confusing. I offer the following conversation as proof. My friend and I tried to watch it last summer. Fifteen minutes in, the following exchange occurred.

I rest my case.

While this movie is extremely fun, the beginning, specifically Milo’s “opportunity” in the form of Helga is very convenient. It works in a short kid's film like this, but writers, take note. Don’t just throw a convenient catalyst in the path of your protagonist. Make your characters work.

Also, don’t kill off roughly 180 people, making throw-away characters out of them. But I digress.

And join me next week for the beginning of the Bs, Bambi.

Manuscripts have claws, and they hurt!

At least I think it’s good, and I think it’s Wednesday. I’m doing a full read-through of my thesis, and my brain’s a little fried.

Hence the lack of cute smiley pictures this week.

A few days ago I put the following post to my fellow SHUers:

K, I've gotten to the point with my thesis where I'm questioning every word choice, every sentence structure, every punctuation placement. "I didn't describe enough. I described too much. This paragraph needs to be over there." Someone please tell me this is normal before I pull my hair out.

I received a ton of “this is normal” responses, which made me feel better. I also received a handful of “take a break” responses and even one or two “you’re done” responses.

Well, I’m not done, but I learned a lesson. I’m the first to tell people who are freaking about the little things to move on and not get stuck. Yet, chapter 15 dug its claws into me the other day and wouldn’t let go.

So, I guess I learned two valuable lessons this week.

First, the little stuff really will drive you crazy, and the best course of action is to step away from that section/the entire project. I forced myself not to look at chapter 15 anymore, and I’m now feeling much better.

Anyway, still slaving around over here. Can’t wait till I pass it in and can breathe easier.